A 60 kilometre fire front is ravaging areas north of Sydney, as more than 100 blazes take hold amid deteriorating weather conditions. 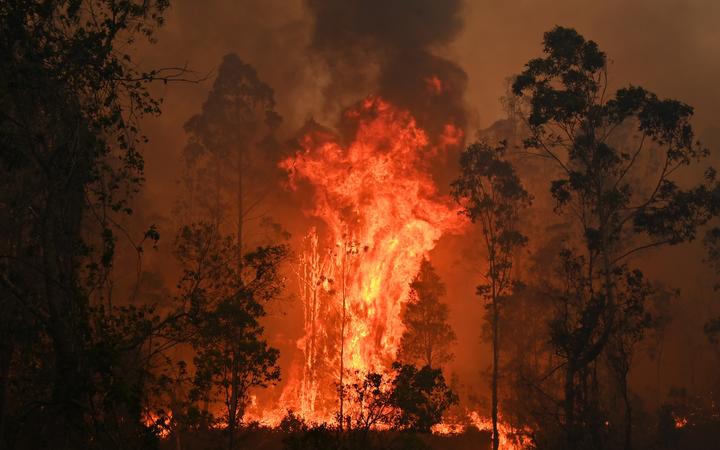 Almost 250 houses have been damaged, while more than 2000 outbuildings have been destroyed or damaged in New South Wales this fire season. Photo: AFP

"They are all in a 60 kilometre stretch that runs from the Colo area in the Hawkesbury, north of Sydney, all the way up to near Singleton," he said.

"There is just fire that whole way."

More than 680 homes have been destroyed by bushfires in NSW this season, the RFS confirmed.

Almost 250 houses have been damaged, while more than 2000 outbuildings have been destroyed or damaged.

A total fire ban is in place for seven regions on Saturday including Greater Sydney.

The updated totals come as the blazes burning north-west of Sydney this morning joined to create what has been dubbed a "mega blaze".

Here’s what firefighters and residents are facing at Werombi in south western Sydney, as the Green Wattle Creek Fire impacts on communities. Dangerous conditions. @nampix at @smh #nswrfs #nswfires pic.twitter.com/6QuNKiSYSH

The Gospers Mountain fire in the Hawkesbury region is the central fire that has merged with two fires in the Lower Hunter - the Little L Complex blaze and the Paddock Run fire near Singleton.

The three fires have burned through more than 300,000 hectares and destroyed about 10 homes.

"We have seen the fire is coming to very close proximity to major population centres, whether it is on the South Coast, Central Coast, or even Greater Western Sydney," Ms Berejiklian said from the RFS control room in Sydney.

"We know there have been some property losses, the extent of which won't be known until the fire conditions are safe for people to go in and have a look, but we also appreciate that many families and many people have been asked to leave their homes and we can appreciate what a scary time this is for many people."

The RFS said on Friday afternoon there were 108 fires burning across the state, with 74 uncontained.

More than 2800 firefighters are at work in conditions the RFS described as "challenging" due to high temperatures and strong winds.

At 4pm there are nine fires at Emergency Warning and nine at Watch and Act. Of a total of 108 fires, 74 are not contained. More than 2,800 firefighters are facing challenging conditions with hot temperatures & strong winds. There is a lot of smoke around Sydney. #nswrfs #nswfires pic.twitter.com/Uf1USjPERX

Total fire bans are in place for 10 regions in NSW, including Greater Sydney, where the fire danger rating is "severe".

Warm and dry winds are expected to continue to elevate fire dangers across north and east parts of NSW.

At one stage last month, emergency warnings were issued for 17 separate blazes on one day.

NSW RFS deputy commissioner Rob Rogers said crews would assess the damage from those blazes today and over the weekend.

"I think that firefighters did some incredible saves last night on properties and I think some of the vision has shown that," he said.

"We've got to work out how many homes we have lost."

Yesterday, firefighters filmed the moment a wall of flames began surrounding them at Orangeville, just 70km from Sydney's CBD.

Mr Rogers said those conditions were "representative" of other areas in NSW.

"The fires in the north, they were dealing with these sort of horrendous conditions, down in the Shoalhaven and Sydney," he said.

"It's reflective of how dry the landscape is.

"The drought makes the fuel so quick to burn and it burns so volatile when it burns."

Firefighting and incident management specialists from Canada were briefed in Sydney this morning.

They will be deployed throughout NSW tomorrow to add their expertise to the battle to control bushfires burning across the state.

A further 21 firefighting specialists will arrive from the US later today.