Northern Territory police say one of three people missing in central Australia for almost two weeks has been found alive. 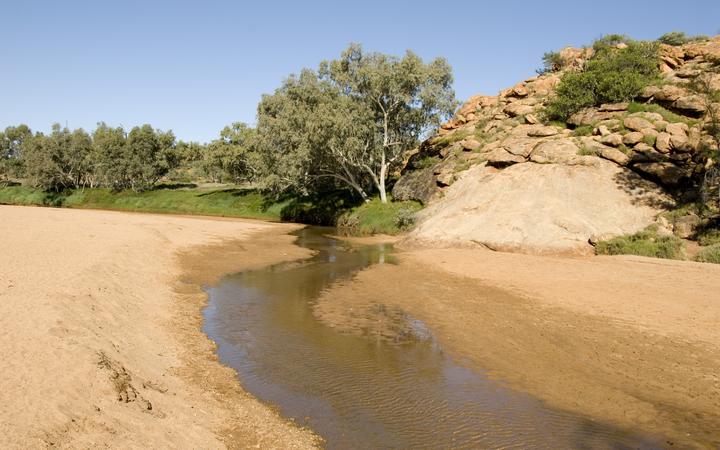 Superintendent Pauline Vicary said police also found the vehicle the trio were travelling in and understand the car became bogged while the group was out for a drive.

"She [Ms McBeath-Riley] has travelled about 1.5km from the vehicle and was in an area where there was some water, so sensibly she appears to have stayed where the water is and has been drinking that and that's probably what's kept her going until we've been able to locate her," Superintendent Vicary said.

The vehicle was found during an air search after a farmer told police they had spotted tyre tracks nearby.

"We got some information from a station worker advising that there were some wheel tracks around the White Hill Dam area, it wasn't in one of the areas that we had previously searched.

"As a result of that information, we were able to locate the vehicle and then from there they have followed some of the other tracks and have located her."

Ms McBeath-Riley was transported to the Alice Springs Hospital to receive treatment for dehydration and exposure.

"We are extremely relieved that we've located her alive," Superintendent Vicary said.

McBeath-Riley in 'good spirits' after rescue

"It looks like she was suffering from dehydration, heat stroke, and some gastrointestinal complaints - but in relatively good spirits considering the ordeal she's been through," he said.

"We've got a crew on standby in Stuarts Well today to assist with the search efforts and all of us are fingers crossed they will find these two people as well," he said.

The group left Alice Springs for what has been described as an "afternoon trek" on Tuesday, 19 November and extensive police air searches last week had failed to find the trio.

Ms Vicary said there was a note left on the vehicle dated 21 November.

"They left it in the vehicle to say that they had been bogged, and what direction they were going to be going in and to get help."

She said it appeared Ms McBeath-Riley had gone north of the vehicle and the others had gone west.

Ms Vicary said the search area has been narrowed down significantly.

"Based on the information that we have at the moment, they're probably heading towards the Stuart Highway, which is about 22 kilometres from where the vehicle was."