The Canadian province of British Columbia's legislature unanimously approved a bill to implement a UN agreement on the rights of indigenous peoples which would formally allow them a say in matters affecting their rights. 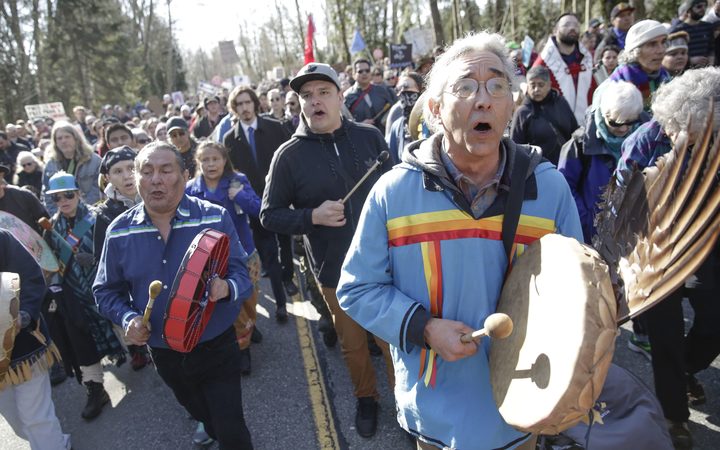 Indigenous leaders and other groups demonstrated against the expansion of the Trans Mountain pipeline project in Burnaby, British Columbia, in 2018. Photo: AFP

The bill, approved late on Tuesday, provides a legal framework for governments' relationship with indigenous residents.

"This legislation advances a path forward to true reconciliation," Scott Fraser, British Columbia's minister of indigenous relations, said in a joint statement with the leaders of the indigenous groups who helped write the legislation - the BC Assembly of First Nations, the Union of BC Indian Chiefs, and First Nations Summit.

British Columbia is the first province in Canada to legally commit to bringing its laws up to the standards outlined in the UN Declaration of the Rights of Indigenous Peoples (UNDRIP).

"It is time we recognize and safeguard Indigenous peoples' human rights, so that we may finally move away from conflict, drawn-out court cases and uncertainty, and move forward with collaboration and respect."

The statement cautioned that "change won't happen overnight," and the process of bringing British Columbia's laws in line with UNDRIP "will be a gradual, step-by-step process over time."

Prime Minister Justin Trudeau's government attempted to pass a law that would commit Canada to UNDRIP's standards during its first term in power, but the bill stalled due to criticisms that it would give indigenous groups a veto on future energy projects.

It must now receive royal assent, and is expected to be formally passed into law before the legislature's current session ends on Thursday.