Hong Kong police have laid siege to a university, firing rubber bullets and tear gas to pin back anti-government protesters armed with petrol bombs and other weapons and stop them from fleeing amid fears of a bloody crackdown. 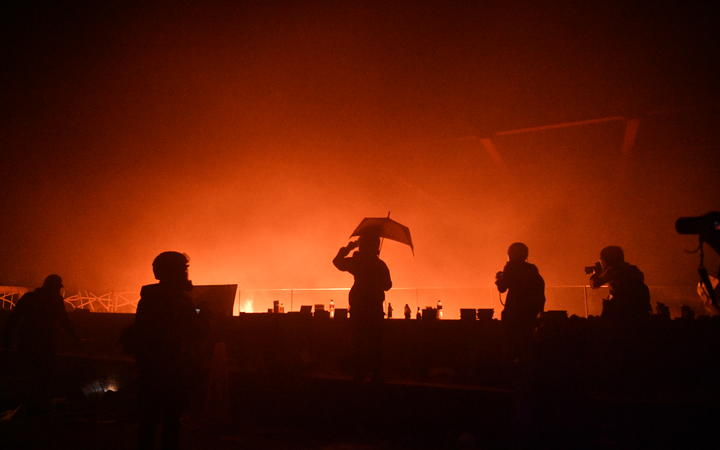 A large fire burned near an entrance to a besieged Hong Kong campus on November 18 morning after protesters threw Molotov cocktails to fend off a police advance on the university, according to AFP reporters at the scene. Photo: AFP

Dozens, choking on the tear gas, tried to leave the Polytechnic University by breaking through police lines after a night of mayhem in the Chinese-ruled city in which roads were blocked, a bridge set on fire and a police officer was shot by a bow and arrow.

Many protesters, dressed in regular clothes and without gas masks, made a run for it, dodging tear gas canisters and sponge grenades, only to be forced back inside.

Some were arrested, tackled to the ground, as others scrambled and tripped over barricades and fences as police pointed guns at them and threw punches.

"The police might not storm the campus but it seems like they are trying to catch people as they attempt to run," Democratic lawmaker Hui Chi-fung told Reuters.

"It's not optimistic now. They might all be arrested on campus. Lawmakers and school management are trying to liaise with the police but failed."

Police said officers had been deployed "on the periphery" of the campus for a week, appealing to "rioters" to leave.

"All our warnings were ignored," they said in a statement. "Our message was loud and clear, the violence has escalated to rioting."

They said "toxic and dangerous chemicals" had been stolen from the university laboratory.

"We must warn that the university campus has become a powder keg where danger is far beyond what we can estimate," police said.

Police arrested 154 people aged between 13 and 54 over the weekend. 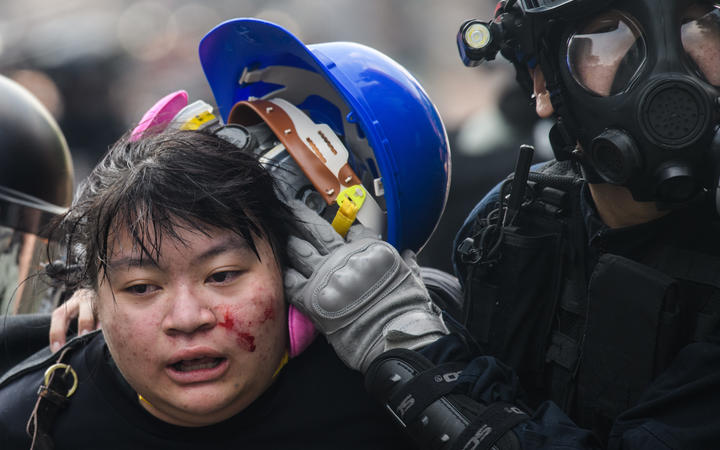 Police detain a protester during an attempt to escape the campus of the Hong Kong Polytechnic University in the Hung Hom district of Hong Kong. Photo: AFP

Dan, a 19-year-old on the campus, burst into tears as he said the protesters had been trapped for too long.

"We need all Hong Kongers to know we need help," he said. "I don't know how much longer we can go on like this. We may need international help."

One 24-year-old protester, who gave his name as "Be Patient", said he nearly suffocated in the crush.

"We couldn't move at all. The police didn't stop ... they still used rubber bullet and sponge rounds to attack us. We're talking about a distance of one metre."

There were also running battles in the nearby commercial area of Nathan Road where activists stopped traffic and forced shopping malls and stores to shut.

Police said a car tried to hit an officer in the nearby Yau Ma Tei district on Sunday night, reversing and trying again. Police fired a shot and the driver fled.

Police said they fired three live rounds when "rioters" attacked two officers who were attempting to arrest a woman. No one was wounded and the woman escaped amid a dramatic escalation of the unrest that has plunged the Asian financial hub into chaos for almost six months.

Demonstrators are angry at what they see as Chinese meddling in Hong Kong's promised freedoms when the then British colony returned to Chinese rule in 1997. They say they are responding to excessive use of force by police. 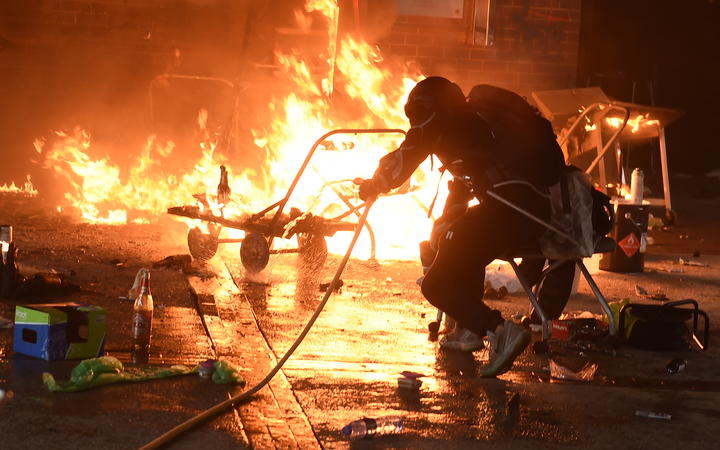 A student tries to extinguish a fire at the entrance of Hong Kong Polytechnic University. Photo: AFP

China says it is committed to the "one country, two systems" formula granting Hong Kong autonomy, while the city's police deny accusations of brutality and say they show utmost restraint.

China's foreign ministry said on Monday no one should underestimate its will to protect its sovereignty.

"If you are viewing the facts with an impartial view you can see that what is happening in Hong Kong is no longer a simple demonstration, it is a handful of violent criminals conducting violence against civilians," ministry spokesman Geng Shuang told a briefing.

Chinese troops in shorts and T-shirts, some carrying red plastic buckets or brooms, emerged from their barracks on Saturday in a rare public appearance to help clean up debris.

Chinese troops have appeared on Hong Kong's streets only once since 1997, to help clear up after a typhoon last year.

The unrest poses the gravest popular challenge to Chinese President Xi Jinping since he came to power in 2012. Beijing denies interfering in Hong Kong's affairs and has blamed Western countries for stirring up unrest.

The Hong Kong government invoked a colonial-era emergency law in October banning faced masks commonly used by protesters. The High Court ruled on Monday the ban was unconstitutional and police said they would suspend all such prosecutions.