An English tourist has had his foot bitten off and his friend has suffered serious injuries during a shark attack in Australia's Whitsundays. 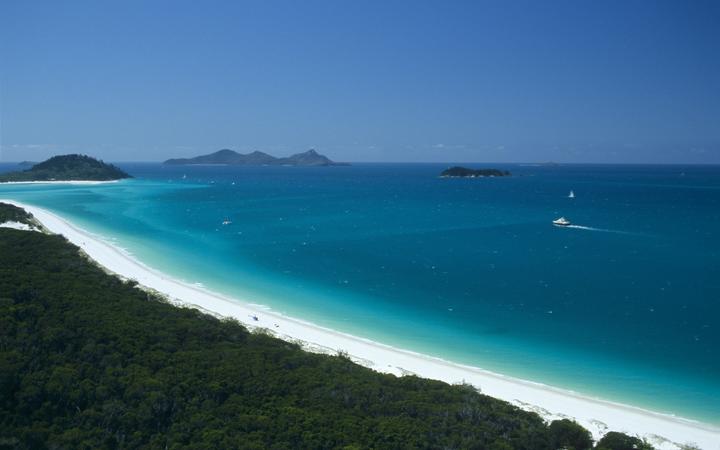 Queensland Ambulance Service's (QAS) Tracey Eastwick said it was believed the pair, who had been day tripping on a vessel, were mauled while snorkelling in Hook Passage.

"One of the male patients was attacked first and the shark is believed to have returned and attacked the second patient," Ms Eastwick said.

The CQ Rescue Helicopter Service said Alistair Raddon, 28, told members of their crew he and 22-year-old Danny Maggs had been wrestling and thrashing about in the water when the attack occurred.

Tracey Eastwick from QAS said the pair were given first aid by paramedics from overseas who happened to be on the boat.

"They've applied tourniquet to both patients and continued treatment into Abell Point Marina where they've met two of our ambulance frontline crews there," Ms Eastwick said.

#RACQ #CQRescue arriving at Mackay Base Hospital at 12.40pm with two patients on board after a Shark attack in the Whitsundays. pic.twitter.com/UJy46tYEIi

Paramedic Steve Thurtell said the men were in good spirits

"They were having a comment about the World Cup football, but clearly the impact was not lost on them."

The English tourists were conscious and alert while being flown from Airlie Beach to Mackay Base Hospital in a serious but stable condition.

Mr Raddon lost his foot in the attack while Mr Maggs suffered serious lacerations to his calf.

Hook Passage is located between Hook Island and Whitsunday Island, around 25 kilometres from Airlie Beach.

Tour company ZigZag Whitsundays said its thoughts were with the men and their families.

Whitsunday Mayor Andrew Willcox said about 20 people were on board the boat when the incident happened.

"It's a very quick boat so they came straight back in and the Ambulance Service was already on site," he said.

"As soon as the boat docked, the ambos went straight to work. I tell you what, I can't praise the Queensland Ambulance Service enough."

He said the tourists have been offered counselling.

Ms Wheeler said she did not believe there had ever been drum lines in the area where the attack happened.

No 'politics of drum lines today'

State Fisheries Minister Mark Furner said it would be near impossible to have a shark control program in the Whitsundays.

"There has never been a shark control program in operation in the Whitsundays. The only time, last year in September, was a short trial of seven days in the Cid Harbour area following the fatality and the two attacks in that location."

Premier Annastacia Palaszczuk initially would not be drawn on the issue of drum lines and Queensland's shark culling program, which were recently the subject of a court challenge.

"I'm not going to talk about the politics of drum lines today. My main concern today is for the welfare of these two people that have been injured by what appears to be a shark attack.

But Ms Palaszczuk was asked if the Federal Government needed to introduce reforms in the next sitting to allow drum lines to be put back.

"I will not shy away from my stance that the drum lines need to go back in," she said.

A progress report released last week found more than 50 sharks, including tiger sharks and bull sharks, were caught in the Whitsundays over three one-week periods.

The report was commissioned by the State Government after three tourists were attacked by sharks in Cid Harbour late last year, including a Victorian doctor who died.

It also found some sharks cover long distances, including a 2.8 metre bull shark that travelled as far as Thursday Island in the Torres Strait, before returning to the Whitsundays, three months later.

A final report will be released next year.

Mayor Andrew Willcox wouldn't answer questions on drum lines, saying his priority was the welfare of the people involved in Tuesday's attack.

"When the dust settles there'll be a lot of things that we discuss."