Climate change protesters have clashed with police in violent scenes outside an international mining conference in Melbourne. 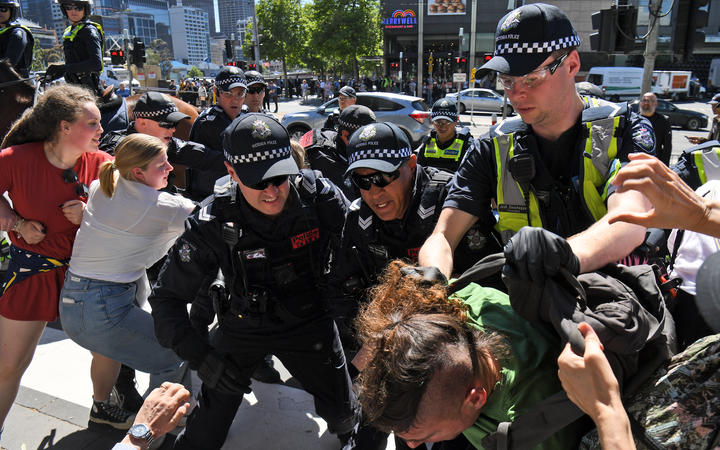 Police have arrested more than 40 demonstrators outside the Melbourne Exhibition and Convention Centre, where the International Mining and Resources Conference (IMARC) is being held.

More than 100 protesters were met by almost as many police at the venue on the Yarra River.

Police used capsicum spray on some protesters, and used horses to force the demonstrators away from the entrances to the building.

A Victoria Police spokeswoman said the majority of arrests were for offences relating to failing to obey police directions or intentionally obstructing emergency workers.

Two people were arrested for assaulting a police horse.

Police said four officers were injured while making arrests, and three of them were taken to hospital for injuries including a dislocated finger and minor head injuries.

A female demonstrator was taken to hospital after allegedly being injured by a police horse.

A protester, Paul, said the woman, a 23-year-old from Chile, was injured when a police horse backed onto her.

"I was standing beside her, one of the police officers had sprayed me, then threw her back away from me, and then the horse reared up and stepped on both of her legs," he said.

"Both legs have been broken, definitely - she's got no feeling in her legs, she can't move her toes."

Another man was treated at the scene for a cut to his head.

Police defended the actions of officers, saying in a statement that "any action taken by officers this morning has been in response to the protesters' activity and in accordance with training".

Emma Black, a spokeswoman for the Blockade IMARC alliance, said police had employed "some incredibly aggressive and intimidating tactics" in response to the protesters. 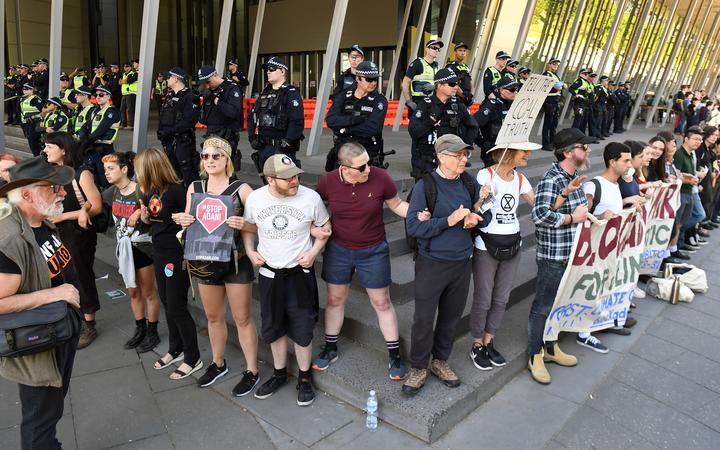 "We're the non-violent ones. The police have been incredibly violent this morning," Ms Black said.

"Some of my friends have been thrown to the ground, people that were just standing around doing nothing."

She said the protesters belonged to more than 20 organisations and included unionists, environmentalists and animal rights activists.

"Our aim is to shut down the conference, to stop mining executives and investors getting into the building, and so far I think we're doing a good job of that.

"We're making noise, we're getting the voice out there."

Police getting out the battons to try and get #climate criminals into #IMARC #mining conference @akaWACA @blockadeIMARC19 pic.twitter.com/LAcQhR5WLT

"IMARC is aware of protestors at the conference," it said in a statement issued yesterday.

"We work in an inclusive industry and we welcome a diverse spectrum of views at the forum.

"Just as those outside have the right to protest peacefully, the 7000 experts from across the globe have the right to meet to discuss meaningful, achievable ways to make mining safer, more sustainable and beneficial to communities around the world."

"They absolutely want to have their Facebook and social media statuses updated by this sort of thing," he told ABC News Breakfast.

"Mining and resources provide a lot of money, particularly for the welfare payments a lot of those people are no doubt on."

One of the conference attendees, Alex Arbuthnot, a dairy farmer from Sale, said the protesters should not block access to the venue.

"Everybody's entitled to their protest," he said.

"When I was a student I protested too. All I want to know is how do I get into the conference. They have their right to protest but they should not blockade.

"I come from a town where our top farmers and miners have worked side by side for 50 years, and my sons and daughters work in the mining companies."

Conference attendees were later able to enter the venue.

Earlier, protesters blocked traffic outside the venue on Clarendon Street.

Victorian Opposition Leader Michael O'Brien called for the reintroduction of police move-on powers to stop what he described as "protesters taking over Melbourne".

Mr O'Brien said protests were becoming a daily occurrence in the city and he felt sorry for people who were just trying to get to work.