Clashes between police and elements of a 10,000 crowd of demonstrators transformed part of central Barcelona into a battleground late as another day of pro-independence protests turned violent. 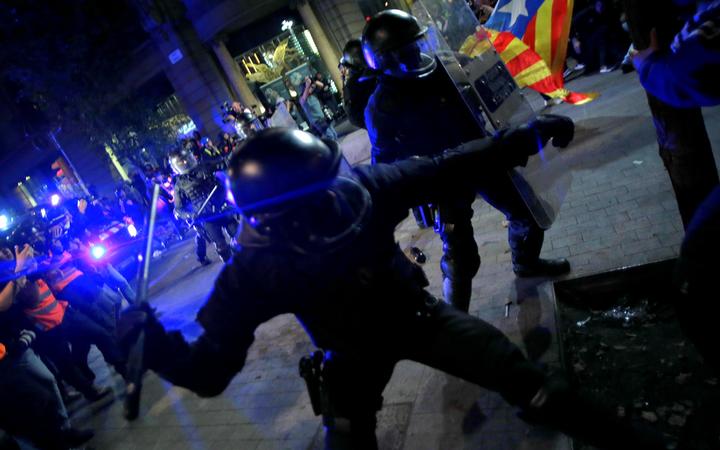 Police charge against protesters in the streets of Barcelona after the demonstration called freedom. Photo: AFP

Projectiles were fired, at least six people were hospitalised with injuries, and barricades were set alight after officers charged ranks of demonstrators - many young and masking their faces - who had amassed outside Spanish police headquarters on Saturday evening local time.

The violent standoff in the city's tourist heartland offered stark evidence of the faultlines developing between hardline and conciliatory elements within the region's independence movement. It lasted several hours before protesters dispersed through the city's streets.

That was when Spain's Supreme Court sentenced nine politicians and activists to up to 13 years in jail for their role in a failed independence bid in 2017, prompting widespread anger in the region and sending shockwaves through Spain's political landscape.

The protest was not the first marred by violence, with unrest notably on 19 October having been more widespread.

But it contrasted starkly with events earlier in the day, when some 350,000 Catalans had marched peacefully through the city in support of calls from civil rights groups for the jailed separatist leaders to be freed.

The later protest was organised by CDR, a pro-independence pressure group that favours direct action and has cut off railtracks and roads, as well as trying to storm the regional parliament.

It began around 7:30pm local time and as the crowd grew to around 10,000, according to police estimates, demonstrators threw a hail of bottles, balls and rubber bullets at officers, TV footage showed.

Police carrying shields and weapons and backed by some 20 riot vans then charged the demonstrators in an attempt to disperse them, splitting the crowd in two along Via Laietana near the police HQ.

Some projectiles were fired, with a Reuters photographer among those hospitalised after being hit in the stomach by a rubber or foam bullet. Catalan emergency services said that, in all, six people were hospitalised.

The organisers of the earlier protest, grassroots groups Assemblea Nacional Catalana (ANC) and Omnium Cultural, had hoped that, with pro-secessionist parties split over what strategy to adopt, it would refocus attention in the secessionist camp by drawing the largest crowd since the court verdicts were passed.

"From the street we will keep defending all the (people's) rights but from the institutions we need political answers," ANC leader Elisenda Paluzie told the gathering, pledging to organise more protests.

All those figures, however, represent only a small percentage of the region's 7.5 million population and its electorate is almost evenly split over the issue of independence.

Mainstream Spanish parties, including the minority Socialist government, have consistently rejected moves towards Catalan independence and all bar left-wing Podemos are opposed to any form of referendum.

They are now gearing up for a national election on 11 November.

Prison 'not the answer'

Both ANC and Omnium Cultural eschew violence and their then leaders were among the nine jailed on 15 October.

Many who joined their march carried Catalan pro-independence flags and banners bearing slogans that included: "Prison is not the answer", "Sit and talk" and "Freedom for political prisoners".

In the front row was regional government head Quim Torra, who earlier presided over a ceremony at which hundreds of Catalan mayors endorsed a document demanding self-determination.

"We have to be capable of creating a republic of free men and woman ... and overcoming the confrontational dynamic with a constructive one," he told them.

While not currently affiliated to any party, Mr Torra belongs to the separatist political movement Junts per Catalunya. It has been in favour of maintaining confrontation with authorities in Madrid, while its leftist coalition partner Esquerra Republicana de Catalunya favours dialogue.

One marcher, 63-year-old Maria Llopart, criticised the lack of unity between the two parties. "Everything looks very bad, we are not advancing," she said.

Francesc Dot, 65, said the nine leaders had been jailed in defence of "Spain's unity".

His wife, Maria Dolors Rustarazo, 63, said she should also be in prison because she voted in the 2017 referendum, which Spanish courts outlawed. "If (all separatist votes)... have to go to jail, we will go but I don't think we would all fit," she said.

She condemned the violence but had understanding for young protesters being "angry at the lack of democracy".

On Saturday they included Manel, a 20-year-old student with his face obscured by a cloth who said he was among those who lit barricades during last week's unrest.

"We need a consistent protest: more streets and less parliamentary talk because that doesn't seem to work," he said before the CDR protest turned violent.

"If we halt the economy, the Spanish government would be obliged to talk."