Aspirational plans to train 150,000 volunteers to help wipe out invasive species in New Zealand has led to calls to adopt the same strategy in the United Kingdom. 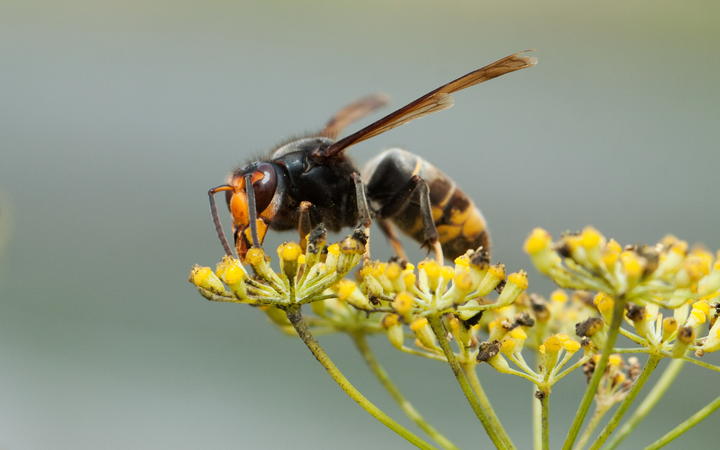 The Asian Hornet is one invasive species in the UK. Photo: 123rf

More than a million volunteers are needed to tackle the spread of invasive non-native species in the UK, MPs say.

It is estimated that between 36 and 48 new pest species will become established in the next 20 years, according to a report by the Environmental Audit Committee.

A government spokesperson said it was "committed" to tackling the problem.

The phrase "invasive non-native species" (Inns) describes those species that have been directly moved as a result of human activity. In the UK, examples include the Asian hornet and giant hogweed.

The report says slowing their rate of arrival is the first priority in stopping their establishment.

It cites New Zealand's plan to train 150,000 people in biosecurity by 2025 and says the UK government should significantly expand its approach to public engagement.

The committee wants 1.3 million people to be taught how to spot "outbreaks" of invasive species.

It also calls for a dedicated border force to be established by 2020 to improve biosecurity at UK borders, and bans on importing problem species before they present a risk to the UK.

Ms Creagh, a Labour MP, said: "Invasive non-native species are one of the UK's top five threats to the natural environment. If we're to beat this, we need people power, with an army of volunteers trained to spot and stop an invasive species before it becomes established.

"Oak processionary moth caterpillars can strip an oak tree bare as well as posing a hazard to our own health. We face losing half of the UK's native ash trees to ash dieback within a century, costing £15 billion ($NZ30.3 billion).

"New regulations to halt their progress are welcome but they are too little, too late. Government funding to tackle invasive species is tiny and fails to match the scale of the threat."

Labour MP Mary Creagh is among those impressed by New Zealand's plan to train 150,000 people in biosecurity by 2025. Photo: AFP

The report also calls for the government to set up a rapid-response emergency fund to enable agencies to tackle a threat before it gets out of control and to increase funding for the Non-Native Species Secretariat to £3m per year.

A spokesman for the Department for Environment, Food and Rural Affairs (Defra) said: "Invasive non-native species not only challenge the survival of some of our rarest species but damage our natural ecosystems as well as costing the economy more than £1.7bn per year.

"We are committed to being leaders in tackling invasive species, and our 25-year Environment Plan commits us to enhancing the biosecurity of the country even further.

"We welcome the EAC's report and will now carefully consider its findings and recommendations."