A Bangladesh court has sentenced 16 people to death for the murder of a student set on fire after accusing her teacher of sexual harassment. 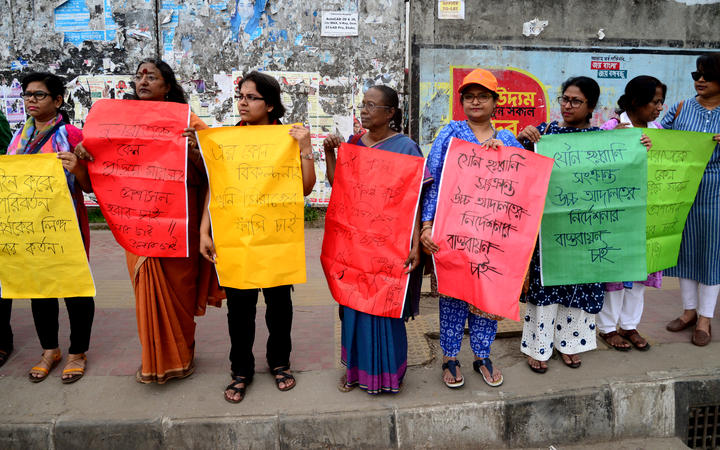 Nusrat Jahan Rafi, 19, died in April in Feni, a small town some 160km outside the capital Dhaka.

The head teacher Nusrat had accused of harassment and two female classmates were among those convicted.

Her murder shocked the country and led to a series of protests demanding justice for Nusrat.

The trial has been one of the quickest in a country where such cases usually take years to conclude. Prosecutor Hafez Ahmed told reporters it proved "that nobody will get away with murder in Bangladesh".

The investigation into Nusrat's death revealed a conspiracy to silence her which included her own classmates and a number of powerful men from within the community.

Three teachers, including the headmaster, Siraj Ud Doula, who police say ordered the killing from prison, were found guilty by the court on Thursday, while another two of the defendants found guilty, Ruhul Amin and Maksud Alam, are local leaders of the ruling Awami League party.

A number of local police were found to have collaborated with those convicted in spreading false information that Nusrat had committed suicide.

What happened to Nusrat?

She was lured to her school's rooftop on 6 April this year, 11 days after she reported the headmaster, Siraj Ud Doula, to police for repeatedly touching her inappropriately.

Nusrat was then surrounded by four or five people wearing burqas, pressuring her to withdraw her complaint.

When she refused, they set her on fire.

According to police, they had hoped to make it look like a suicide. Instead, she was managed to escape and get help.

But knowing she was badly hurt, she gave a statement which her brother filmed on his phone.

"The teacher touched me, I will fight this crime till my last breath," she says, naming some of her attackers.

Nusrat, who had sustained burns to 80 percent of her body, died four days later, on 10 April.

How widespread is sexual abuse in Bangladesh?

Sexual harassment is thought to be relatively commonplace in Bangladesh: a recent report by charity ActionAid earlier this year found 80% of women working in Bangladesh's garment industry have either seen or experienced sexual violence at work.

But speaking out like Nusrat is still uncommon as reporting sexual harassment can come with consequences. Victims often face judgement from their communities, harassment, in person and online, and in some cases violent attacks.

Nusrat was particularly unusual because she went to the police. They filmed her statement on a mobile phone - which was later leaked to the media.

Meanwhile, protesters took to the streets to demand the release of the headmaster, leading her family - who were supportive of her attempt to get justice - to fear for her safety.

How did the public react to Nusrat's murder?

The case sparked mass protests in Bangladesh and shone a spotlight on the vulnerability of victims of sexual assault and harassment in the country.

Bangladeshi Prime Minister Sheikh Hasina publicly pledged that "none of the culprits will be spared from legal action".

The police, who had initially dismissed the sexual harassment, laid charges against 16 accused in May. Prosecutors were calling for the death penalty.