At least 62 people have been killed and dozens injured by a bomb during Friday prayers at a mosque in Afghanistan, , according to a provincial spokesperson. 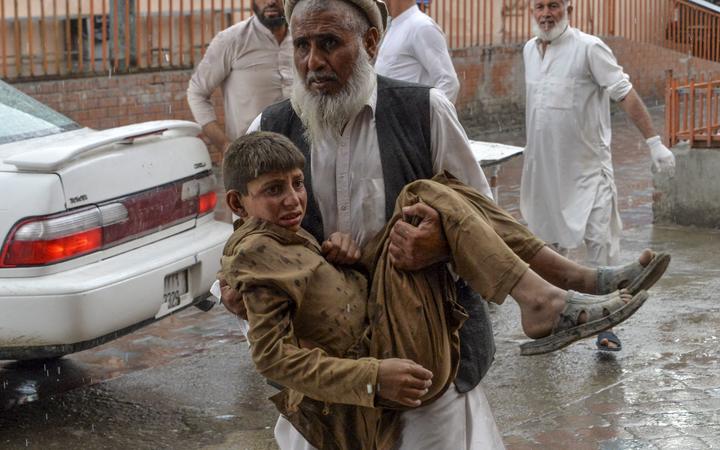 The force of the blast, in eastern Nangarhar province, destroyed the building's roof, eyewitnesses said.

No one immediately claimed responsibility for the attack.

The blast came the day after the UN said the number of civilian deaths in the war-torn country had reached unprecedented levels over the summer.

According to the UN, 1174 civilians were killed between July and September, the deadliest quarter since UN records began a decade ago.

Meanwhile, a BBC study which attempted to document every killing during the month of August found a fifth of all those who lost their lives were civilians.

Attaullah Khogyani, the provincial governor's spokesman, told the BBC that the 62 people killed and 36 more injured in Friday's attack were worshippers.

The mosque sits in the district of Haska Mina, about 50km from the provincial capital Jalalabad.

Eyewitnesses reported hearing a loud explosion, before the roof of the mosque caved in. According to Afghanistan's Tolo News, a number of explosives are believed to have been used.

"It was a heartbreaking scene I witnessed with my eyes," tribal elder Malik Mohammadi Gul Shinwari told the Reuters news agency.

Local police officer Tezab Khan said he could hear the sound of the Mullah preaching but "suddenly his voice was silenced with a boom".

"When I arrived on the scene, people were trying to bring out the bodies and injured who were stuck under the fallen roof," he added.

Sohrab Qaderi, a member of the provincial council in Nangarhar, warned the number a casualties was likely to rise as people were "working to bring out the bodies from the rubble".

It is not clear who carried out the attack. The Taliban have denied they were behind the bombing.

Both the Taliban and the Islamic State militant group are known to be active in the area.

According to the UN, anti-government forces have been responsible for the majority of civilian deaths since the start of 2019, due to the surge in violence over the summer.

This is change from the first six months of the year, when Afghan and US forces killed more civilians.

The UN's data, which was released on Thursday, also revealed that 41 percent of all those killed since January were women and children.

The BBC's research - which uses different methodology to the UN - found that, in August, there was not a single day when someone was not killed due to the conflict. This included militants, soldiers and civilians.