Holidaymakers stranded by the collapse of Thomas Cook, the world's oldest travel firm, have desperately scrambled for information on how to get home, as Britain mounted a huge repatriation effort. 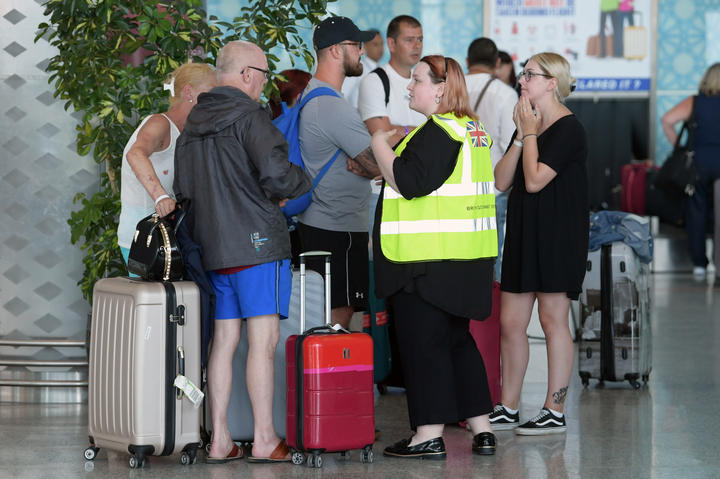 A British government official speaks to tourists in Tunisia booked with Thomas Cook as they queue at the Enfidha International airport. Photo: AFP

At airports around the world travellers scoured mobile phones or quizzed officials for travel updates as they waited in long queues beneath flight boards showing flights delayed or cancelled.

"Not what we wanted really before going home. But what can you do? Other people have lost their jobs, so we're not as bad (off) as some other people," he said, with two young children - an 18-month-old and 12-year-old - in tow.

He and his family had been due to fly back to the northeastern English city of Newcastle on Sunday evening but now hoped to fly to Manchester on Monday evening and then to travel the 240km back to their home city by coach. 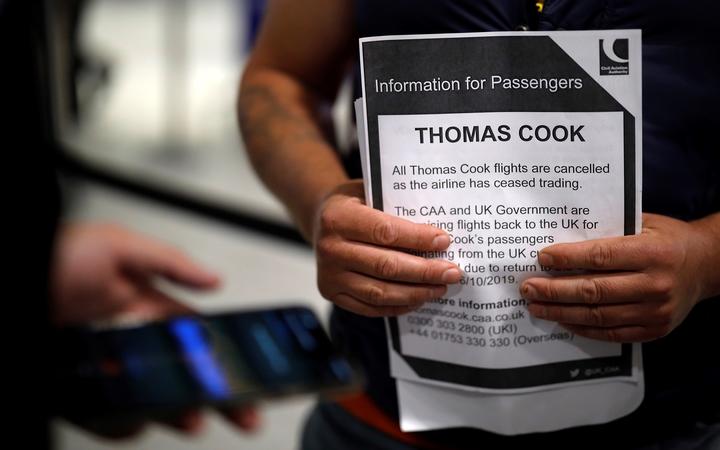 A passenger at Gatwick Airport south of London holds a leaflet after arriving at the closed Thomas Cook check-in desk. Photo: AFP

Scottish tourists hoping to fly back to Glasgow said they now expected to head to the central English city of Birmingham, 400km away.

"I'm very anxious because I have sore legs so I don't know how... I'm going to get to Glasgow if they take us to Birmingham or somewhere else. So it's going to be very difficult and a long day and I'm very tired," said one woman in a wheelchair.

The British government has pledged to get an estimated 150,000 stranded British holiday makers home in the biggest such repatriation operation since WWII, but that is no consolation for many others whose holiday plans lie in ruins.

"We're absolutely gutted, we've looked forward to this for a long time, had the wedding in July so it's been another couple of months waiting for this," said Simon, who had been due to go on honeymoon with his wife Polly from London's Gatwick Airport.

He said he felt very sorry for the staff at his local Thomas Cook travel agency who he said had been helpful.

"Must be awful for them as well, coming up to Christmas as well. Yeah, I feel very sorry for them... I wish the government had maybe stepped in... It could have been done I think, but there's nothing we can do now. Just have to go home and make the most of it."

Many travellers complained of a lack of information.

"Obviously the customer services you couldn't get a hold of. The travel company we were travelling with, you can't get a hold of them," said Steve Tarrant, who had planned to fly to Cancun, Mexico, from Manchester Airport.