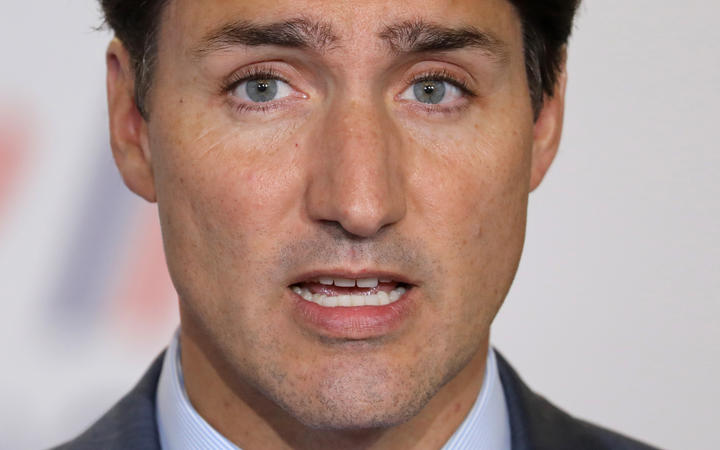 Canada's Prime Minister Justin Trudeau, a fervent advocate of the multiculturalism integral to Canadian identity, wore brownface makeup to a party at a school where he taught 18 years ago. Photo: AFP

Addressing the image, Mr Trudeau said he "deeply regretted" his actions and "should have known better".

The 2001 yearbook picture shows Mr Trudeau with skin-darkening make-up on his face and hands at the West Point Grey Academy in Vancouver.

The prime minister is battling for re-election on 21 October.

Mr Trudeau, who is the son of late former Prime Minister Pierre Trudeau, used to teach at the elite academy.

Speaking to journalists after the Time article was published, Mr Trudeau said that he was dressed in the photo in an Aladdin costume at an Arabian Nights-themed gala.

When asked if there had been other occasions, Mr Trudeau told reporters that he also wore make-up while performing at a talent show in high school.

The National Council of Canadian Muslims responded angrily to the report.

Executive director Mustafa Farooq said: "Seeing the prime minister in brownface/blackface is deeply saddening. The wearing of blackface/brownface is reprehensible, and hearkens back to a history of racism and an Orientalist mythology which is unacceptable.

Andrew Scheer, leader of the opposition Conservatives, said the picture was racist in 2001 and racist now.

"What Canadians saw this evening is someone with a total lack of judgement and integrity and someone who is not fit to govern this country," he said.

"Anytime we hear examples of brownface or blackface, it's making a mockery of someone for what they live and what their lived experiences are," Mr Singh told journalists on the campaign trail in Toronto.

The image was also criticised in a tweet by Green Party leader Elizabeth May.

The image is politically embarrassing for the prime minister because he has made progressive policies a signature issue.

Opinion polls indicate that October's election will be a tough race for Mr Trudeau who is seeking a second term in office.

His campaign got off to a bad start after his plane was grounded by a scraped wing on the first day. A bus ferrying journalists collided with the wing of the Liberal party's chartered Boeing last week.

It's not the first time a politician has got into trouble in this way. Virginia governor Ralph Northam admitted he had worn blackface while dressing up as Michael Jackson.

However he denied claims that he had been in a racist photograph in his 1984 medical school yearbook.