An 18-carat solid gold toilet has been stolen in a burglary overnight at Blenheim Palace. 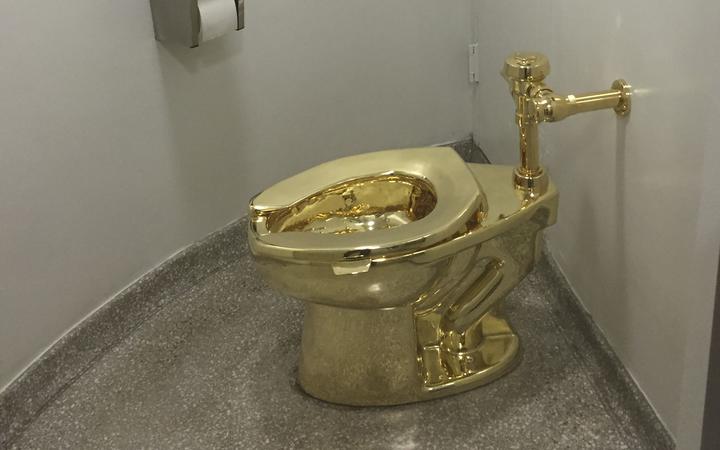 The 18-carat golden toilet was previously displayed at the Guggenheim Museum in New York Photo: AFP

A gang broke into the Oxfordshire palace, in South East England, at about 04:50 BST (3.50pm NZT) and stole the artwork, Thames Valley Police said.

The working toilet - entitled America, which visitors had been invited to use - has not been found but a 66-year-old man has been arrested.

The burglary caused "significant damage and flooding" because the toilet was plumbed into the building, police said.

It was part of an exhibition by Italian conceptual artist Maurizio Cattelan that opened on Thursday.

The 18th Century stately home is a World Heritage Site and the birthplace of Sir Winston Churchill. It is currently closed while investigations continue.

Speaking last month, Edward Spencer-Churchill - half-brother of the current Duke of Marlborough - said he was relaxed about security for the artwork.

"It's not going to be the easiest thing to nick," he said.

Visitors to the exhibition were free to use the palace's throne for its intended purpose, with a three-minute time limit to avoid queues.

Det Insp Jess Milne, said: "The piece of art that has been stolen is a high-value toilet made out of gold that was on display at the palace.

"We believe a group of offenders used at least two vehicles during the offence.

"The artwork has not been recovered at this time but we are conducting a thorough investigation to find it and bring those responsible to justice."

In a tweet, Blenheim Palace said it would remain shut for the rest of the day, but would reopen on Sunday.

Palace chief executive Dominic Hare said they were "saddened by this extraordinary event, but also relieved no-one was hurt".

"We hope that the wonderful work of our dear friend Maurizio Cattelan becomes immortalised by this stupid and pointless act," he added.

The gold toilet was famously offered to US President Donald Trump in 2017.

The arrested man is in police custody.