Wikileaks co-founder Julian Assange is to remain in prison when his jail term ends because of his "history of absconding", a judge has ruled. 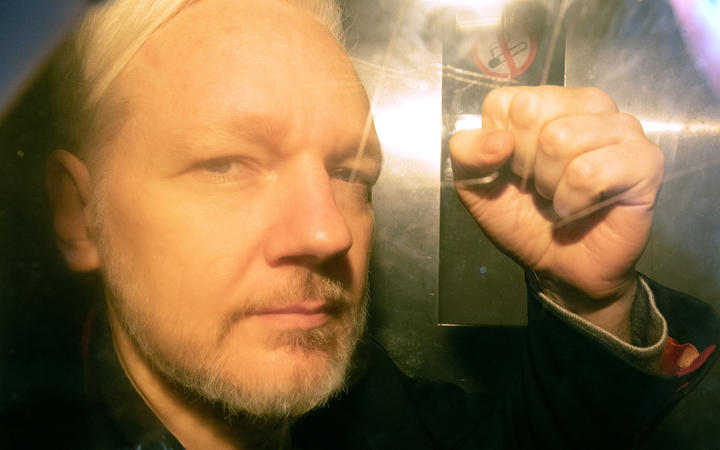 Julian Assange was due to have been released on 22 September from Belmarsh Prison. Photo: AFP

He was due to be released on 22 September after serving his sentence for breaching bail conditions.

But Westminster Magistrates' Court heard there were "substantial grounds" for believing he would abscond again.

The Australian, 48, is fighting extradition to the US over allegations of leaking government secrets.

He will face a full extradition hearing next year, starting on 25 February, after an extradition request was signed by the then home secretary Sajid Javid in June.

Assange received a 50-week sentence in Belmarsh Prison, south-east London, after being found guilty of breaching the Bail Act in April.

He was arrested at the Ecuadorian Embassy, where he took refuge in 2012 to avoid extradition to Sweden over sexual assault allegations - which he has denied.

District judge Vanessa Baraitser on Friday told Assange, who appeared by video-link: "You have been produced today because your sentence of imprisonment is about to come to an end.

"When that happens your remand status changes from a serving prisoner to a person facing extradition."

She said that his lawyer had declined to make an application for bail on his behalf, adding "perhaps not surprisingly in light of your history of absconding in these proceedings".

"In my view I have substantial ground for believing if I release you, you will abscond again."

He faces 18 charges in the US, including computer misuse and the unauthorised disclosure of national defence information.

He is accused of working with former US army intelligence analyst Chelsea Manning in "unlawfully obtaining and disclosing classified documents related to the national defence", according to the US Justice Department.

He spent seven years inside the Ecuadorian embassy in London before being handed over to British authorities by Ecuador in April.

In May, Swedish prosecutors reopened their investigation into an allegation of rape against Assange.