A bomb has exploded in a wedding hall in the Afghan capital, Kabul, killing 63 people and wounding more than 180. 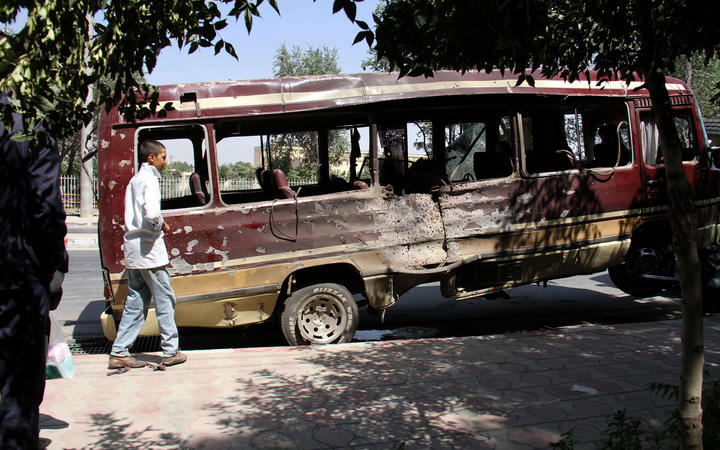 A boy walks past the wreckage of a bus following a suicide bombing in Kabul last month. Photo: Photo / AFP

Eyewitnesses told the BBC a suicide bomber detonated explosives during a wedding ceremony.

The explosion happened at around 10.40pm local time in an area mostly populated by Shia Muslims.

The Taliban denied it was behind the attack. No other group has admitted carrying out the bombing.

Sunni Muslim militants, including the Taliban and the Islamic State group, have repeatedly targeted Shia Hazara minorities in Afghanistan and Pakistan.

The Afghan interior ministry confirmed the death toll hours after the bombing. Pictures on social media showed bodies strewn across the wedding hall.

Afghan weddings often include hundreds of guests who gather in large halls where the men are usually segregated from the women and children.

Wedding guest Mohammad Farhag said he had been in the women's section when he heard a huge explosion in the men's area.

"Everyone ran outside shouting and crying," he said.

"For about 20 minutes the hall was full of smoke. Almost everyone in the men's section is either dead or wounded. Now, two hours after the blast, they are still taking bodies out of the hall."

"Around 1200 guests were invited to the wedding," said Ahmad Omid, a survivor who said the gathering was for his father's cousin.

"I was with the groom in the other room when we heard the blast and then I couldn't find anyone. Everyone was lying all around the hall."

A Taliban spokesman said the group "strongly condemned" the attack.

"There is no justification for such deliberate and brutal killings and targeting of women and children," Zabiullah Mujaheed said in a text message to the media.

The latest blast comes just 10 days after a huge bomb outside a Kabul police station killed at least 14 people and injured nearly 150.

The Taliban said it carried out that attack.

Tensions in the country have been high even though the Taliban and the United States, which has thousands of troops stationed in Afghanistan, are reportedly close to announcing a peace deal.