The four US congresswomen attacked by US President Donald Trump in a series of racially charged tweets have dismissed his remarks as a distraction. 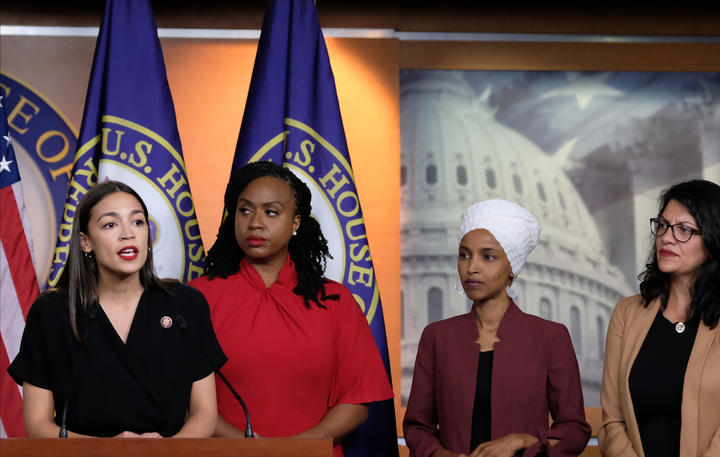 Alexandria Ocasio-Cortez (left) speaks as Ayanna Pressley, Ilhan Omar and Rashida Tlaib listen during a press conference at the US Capitol. Photo: AFP

Representatives Alexandria Ocasio-Cortez, Ilhan Omar, Ayanna Pressley and Rashida Tlaib urged the US people "not to take the bait" at a Monday press conference.

Mr Trump suggested the four women - all US citizens - "can leave".

He has defended his comments and denied allegations of racism.

Addressing reporters, the four women - known as The Squad - all said the focus should be on policy and not the president's words.

"This is simply a disruption and a distraction from the callous chaos and corrupt culture of this administration, all the way down," Ms Pressley said.

Both Ms Omar and Ms Tlaib repeated their calls for Mr Trump to be impeached.

Their response comes after Mr Trump launched a Twitter tirade on Sunday, telling the four women - three of whom were born in the US and one, Ms Omar, who was born in Somalia - to "go back and help fix the totally broken and crime infested places from which they came".

His remarks have been widely condemned as racist and xenophobic.

What did the congresswomen say?

Ms Pressley dismissed the president's efforts "to marginalise us and to silence us", adding that they were "more than four people".

"Our squad is big. Our squad includes any person committed to building a more equitable and just world," she said.

All four women insisted that health care, gun violence, and in particular detentions of migrants on the US border with Mexico should be in focus.

"The eyes of history are watching us," Ms Omar said, decrying the "mass deportation raids" and "human rights abuses at the border".

Ms Omar said Mr Trump's "blatantly racist attack" on four women of colour was "the agenda of white nationalists", adding that he would like "nothing more than to divide our country".

The president earlier had suggested Ms Omar supported jihadist group al-Qaeda. "I know that every single Muslim who has lived in this country and across the world has heard that comment and so I will not dignify it with an answer," she said, adding that she did not expect white community members to respond after a white man "kills in a school or a movie theatre or a mosque or a synagogue".

"When this president ran and until today he talked about everything that was wrong with this country and how he was going to make it great," Ms Omar said, arguing that to call them "un-American" was "complete hypocrisy".

Ms Tlaib called it "simply a continuation of his racist, xenophobic playbook". Both she and Ms Omar repeated their calls for Mr Trump to be impeached - something Democratic party leaders have so far refused to pursue.

"We remain focused on holding him accountable to the laws of this land," Ms Tlaib said.

Ms Ocasio-Cortez meanwhile told a story about visiting Washington DC as a child, saying people should tell the young that "no matter what this president says, this country belongs to you".

"We don't leave the things that we love", she said, adding that "weak minds and leaders challenge loyalty to our country in order to avoid challenging and debating the policy".

What's the row about?

On Friday, Ms Ocasio-Cortez, Ms Tlaib and Ms Pressley had testified to a House committee about conditions in a migrant detention centre they had visited.

Democrats have widely criticised the Trump administration's approach to border control, saying they are holding migrants in inhumane conditions.

Mr Trump insists the border is facing a crisis and has defended the actions of his border agents. His administration announced a new rule to take effect on 16 July that denies asylum for anyone who crosses the southern border who did not apply for protection in "at least one third country" en route to the US.

After their testimony, Mr Trump insisted conditions at the centre had had "great reviews". He then posted his series of tweets about the women and Ms Omar, attacks he redoubled on Monday.

"If you are not happy, if you are complaining all the time, you can leave," he told a heated news conference outside the White House.

As the women spoke at the press conference on Monday evening, he tweeted again.

"If you are not happy here, you can leave! It is your choice, and your choice alone. This is about love for America," he wrote.

What's been the response?

Democrats have roundly condemned the president, and have been joined by several Republicans.

Senator Tim Scott, the only African American Republican in the Senate, called the president's words "racially offensive". Republican Congressman Will Hurd, who is also African American, described the comments as "racist and xenophobic".

"People can disagree over politics and policy, but telling American citizens to go back to where they came from is over the line," he tweeted.

People can disagree over politics and policy, but telling American citizens to go back to where they came from is over the line.

But Republican Congressman Andy Harris had earlier defended Mr Trump, telling WBAL radio: "Clearly it's not a racist comment. He could have meant go back to the district they came from, the neighbourhood they came from."

In a letter to Democrats on Monday, Mrs Pelosi had announced a resolution in the House to condemn the "disgusting attacks". It is unclear when the vote will take place.