US Labour Secretary Alex Acosta is resigning amid criticism of his brokering of a plea deal for financier Jeffrey Epstein in a child sex case. 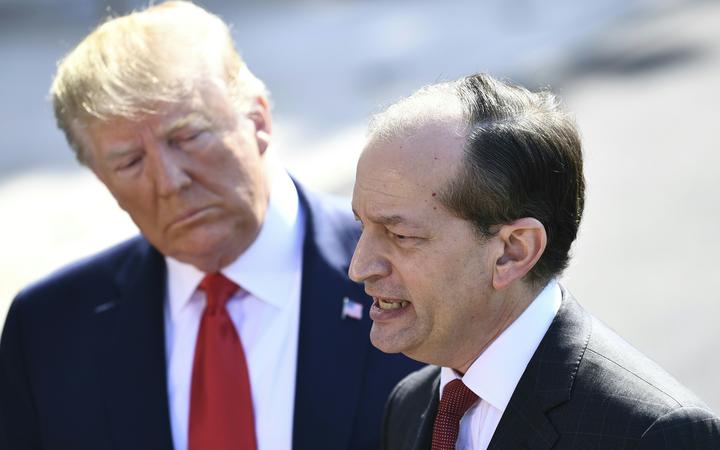 Alex Acosta tells media of his resignation at the White House in Washington as President Donald Trump looks on. Photo: AFP

Mr Acosta, a former Florida prosecutor, made the announcement from the White House lawn today with President Donald Trump stood by his side.

Democrats had called for him to quit over his handling of the Epstein case.

Mr Acosta defended the secretly negotiated plea deal in a news conference only two days ago.

Mr Acosta was the US Attorney in Miami in 2008 when he oversaw a non-prosecution deal against Epstein which allowed Epstein to serve 13 months in jail - with much of that time spent on work release at his Palm Beach office. Epstein's conduct has come into sharper focus since he was arrested and charged on Monday with sex trafficking underage girls.

Mr Trump told reporters that he and Mr Acosta spoke on the phone earlier and that it was Mr Acosta's decision to step down.

"This was him, not me," Mr Trump said, adding that Mr Acosta was "a tremendous talent" who "went to Harvard" University. Earlier this week, Mr Trump told reporters that he felt badly for his labour secretary, but added that he did not know him personally before hiring him.

Mr Acosta told reporters: "I do not think it is right and fair... to have Epstein as the focus rather than the incredible economy that we have today".

But he added: "It would be selfish for me to stay in this position and continue talking about a case that's 12 years old." 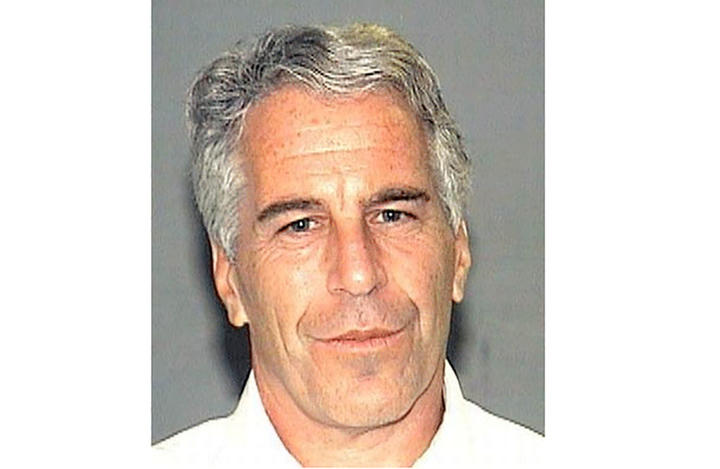 The 66-year-old wealthy financier was charged with running a sex ring of underage girls after being arrested in New Jersey on Monday. He has long been surrounded by the rich and powerful, including President Trump, former president Bill Clinton and Prince Andrew.

On Friday, Mr Trump reiterated "I'm not a fan of Jeffrey Epstein" after earlier saying they had a falling out "12 or 15 years ago". "I threw him out of a club. I didn't want anything to do with him," Mr Trump said about this former friend, as Mr Acosta stood at his side.

"It shows you one thing. I have good taste," he added.

How did Acosta defend the deal?

"I wanted to help them," Mr Acosta said of the 36 victims identified in the case against Epstein, during the hour-long press conference at the labour department on Wednesday.

"That is why we intervened," he said. "And that's what the prosecutors of my office did - they insisted that he go to jail and put the world on notice that he was and is a sexual predator."

Mr Acosta did not apologise for his handling of the case, saying only that the deal - which closed the FBI investigation into whether there were more victims or perpetrators - was a guarantee of jail time. He said that seeking a life sentence in a jury trial would have amounted to a "roll of the dice".

"We now have 12 years of knowledge and hindsight and we live in a very different world. Today's world treats victims very, very differently," he said.

Epstein's punishment 'deal of a lifetime'

The details of the agreement overseen by Mr Acosta were first revealed in a Miami Herald investigation earlier this year, with the newspaper saying that Epstein had been given "the deal of a lifetime".

It allowed Epstein to avoid federal charges, and instead serve 13 months in jail after pleading guilty to state charges including solicitation of prostitution (including one charge involving a minor under the age of 18).

Mr Acosta had been under pressure from Democrats to quit. A federal judge ruled that the deal violated the Crime Victims' Rights Act because Mr Acosta did not notify Epstein's victims of the arrangement.

The deal is also being scrutinised by the Department of Justice.