US President Donald Trump has said the US and UK have the "greatest alliance the world has ever known". 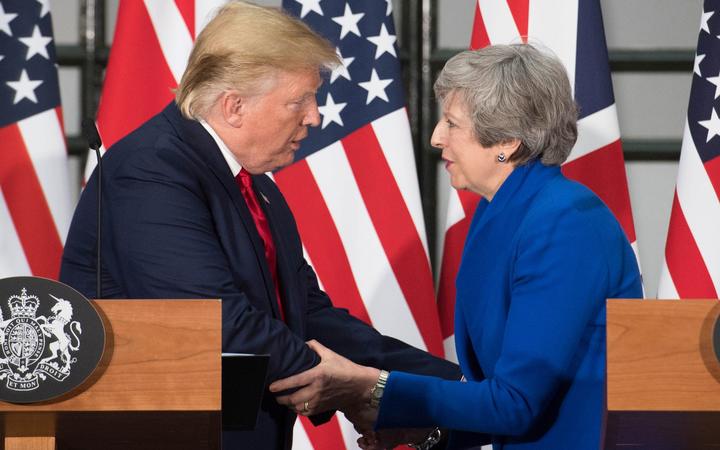 In a news conference with Theresa May, he promised a "phenomenal" trade deal after the UK leaves the European Union, but added that "everything is on the table" - including the NHS.

Mrs May said the scope of trade talks had to be agreed by both countries.

Mr Trump also said he turned down a meeting with Jeremy Corbyn, who addressed protesters in Westminster.

The US president met Brexit Party leader Nigel Farage at the US ambassador's residence, Winfield House.

Mr Farage tweeted that it was a "good meeting" and Mr Trump "really believes in Brexit".

The Labour leader had proposed talks with Mr Trump, saying he was ready to engage with the US president on issues such as climate change, threats to peace and the refugee crisis.

When asked about Mr Corbyn, the US president said he did "not know him, never met him, never spoke to him", adding: "He wanted to meet today or tomorrow and I decided I would not do that."

Mr Trump, who is on day two of his three-day state visit, said Mr Corbyn was a "negative force".

"I really don't like critics as much as I like and respect people who get things done," he said.

As the prime minister and US president paid tribute to the "special relationship", Mr Trump said there was "tremendous potential" in a trade deal after the UK leaves the EU, suggesting it could double or treble trade. 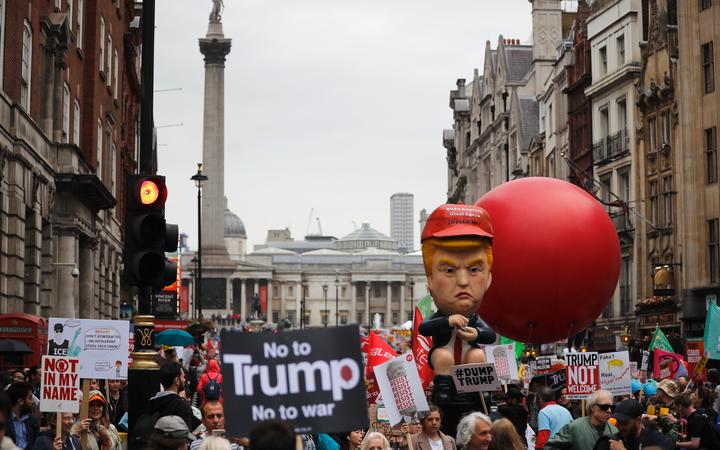 Demonstrators protest against the visit of US President Donald Trump in London. Photo: AFP

Asked if the NHS would be included in post-Brexit trade talks, Mr Trump said "everything is on the table".

Health Secretary Matt Hancock was among several Conservative leadership candidates hoping to replace Theresa May who said they would not allow the NHS to become part of any trade talks. "Not on my watch," he tweeted.

Mrs May said any trade agreement would follow talks about "what should or should not be in that trade deal for the future".

After speaking of the US and UK's "great relationship", she also said they had also "openly" discussed their differences, such as on climate change, Iran and China.

During his visit, the US president is set to hold talks with Mr Gove, according to a source close to the environment secretary.

The source told the Press Association "nothing has been fixed yet", but added: "Mr Gove was asked last night by Mr Trump's team if he would be able to meet the president today. 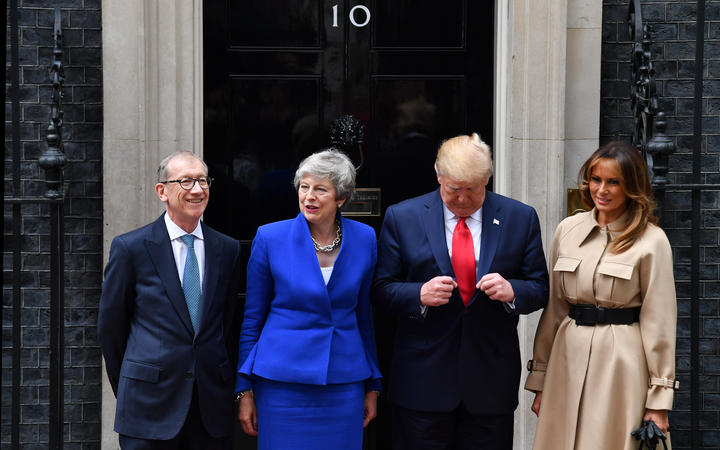 Britain's Prime Minister Theresa May and her husband Philip May greet US President Donald Trump and US First Lady Melania Trump. Photo: AFP

His leadership rival Mr Johnson, who was also praised by Mr Trump before the visit, had a 20-minute telephone call with the president during the state visit.

Mr Hunt is also due to have a meeting with the US president tomorrow as he seeks the Tory party leadership.

Police said more than 3,000 officers have been deployed for the president's visit.

Mr Corbyn - who boycotted the state dinner - was joined at the rally by members of other political parties, including the Liberal Democrats and the Green Party.

But he criticised the US president's attack on Mayor of London Sadiq Khan. "I am proud that our city has a Muslim mayor, that we can chase down Islamophobia, anti-Semitism, any form of racism within our society," he said. 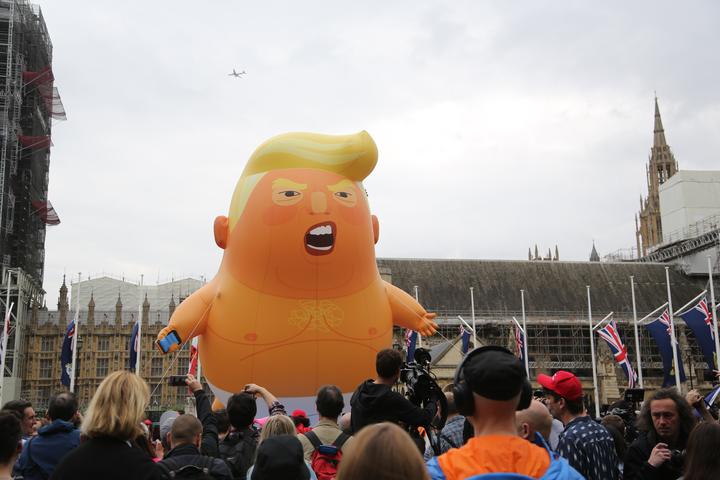 He said he felt he and Mr Corbyn shared the view that a "close relationship" with the US president was important.

But he added: "What shouldn't happen is a state banquet and a state visit with the red carpet rolled out. I think it's inappropriate. I think those visits should be reserved for leaders who have done something and deserve that. I think it sends the wrong message to be seen to condone some of the things this president has said and done."