Three Chinese warships have arrived in Sydney Harbour amid increasingly strident rhetoric from Beijing over its territorial claims in the South China Sea. 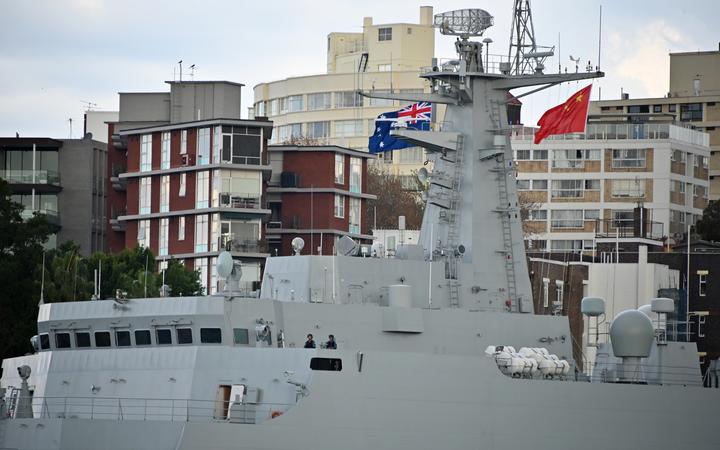 A People's Liberation Army-Navy frigate, an auxiliary replenishment ship and an amphibious vessel are docking at Garden Island for a four-day stopover.

The arrival, which was not publicly announced by the Australian government, came just hours after Chinese Defence Minister General Wei Fenghe struck an uncompromising tone on Taiwan and the South China Sea during a speech in Singapore.

"The People's Liberation Army (PLA) has no intention to cause anyone trouble but is not afraid to face up to troubles," the General told the Shangri La Dialogue forum.

"Should anyone risk crossing the bottom line, the PLA will resolutely take action and defeat all enemies."

Last week, the ABC revealed Chinese warships had recently followed the Australian Navy during a transit of the South China Sea.

Prime Minister Scott Morrison said the arrival of the warships in Sydney had been planned for some time.

He said it was a "reciprocal visit" as Australian naval vessels had visited China.

"[The Chinese vessels] were returning from counter-drug-trafficking operations in the Middle East and that is a further demonstration of the relationship we have."

Rory Medcalf, a national security expert at the Australian National University, said the claim about the ships being on their way back from the Gulf of Aden was confusing.

"Sydney is hardly a convenient stopover on their way home ... this looks like a serious show of presence in the South Pacific," he tweeted.

"Chinese naval visits to Australia have more typically been a lone frigate, not a task group with an amphibious assault ship and 700 personnel."

The Australian Defence Force said it received the request from China in April and planning commenced shortly after.

About 730 officer and sailors are on the three ships, the frigate Xuchang, the auxiliary replenishment ship Luoma Hu and the landing platform dock Kunlun Shan, it said.

"Port visits are conducted by all navies to undertake basic logistics and resupply activities, low-level maintenance and provide valuable opportunities for crew respite," the ADF said.

"The Australian Government is committed to maintaining a long-term constructive relationship with China, founded on shared interests and mutual respect."