Indian rescuers say the chances of finding eight climbers missing in the Himalayas are "bleak". 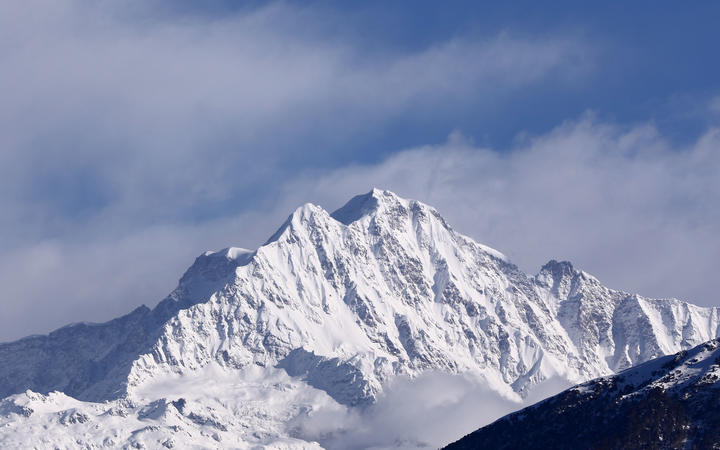 Two Indian air force helicopters were searching the mountains, but officials said the operation had to be suspended due to unfavourable conditions.

At least four crews are also searching on foot.

The missing group, including four Britons, two Americans, an Australian and an Indian, began climbing Nanda Devi on 13 May.

The British group leader's family said they were "deeply saddened".

Earlier, officials said four other British climbers had been rescued. They have been named by India TV as Mark Thomas, Ian Wade, Kate Armstrong and Zachary Quain.

They were airlifted to safety after being spotted early on Sunday at a base camp near Nanda Devi.

The four rescued were not part of the larger group, but were in touch with them until 26 May - a day before an avalanche hit the 7,816-metre mountain, according to authorities.

This smaller group had returned to the base camp from Nanda Devi East due to harsh weather conditions, while the eight-member group headed for the summit of another unnamed peak, government official Vijay Kumar Jogdanda said.

The missing group was being led by experienced British mountain guide Martin Moran, whose Scotland-based company Moran Mountain has run numerous expeditions in the Indian Himalayas.

In a statement, his family said they were pressing for the search area to be widened, and wanted it to continue until they had firm evidence of the "wellbeing or otherwise of all those in the climbing group".

But he warned the monsoon season was now moving into the area, bringing with it heavy rain and fresh amounts of snow in the mountains.

"We are worried there's an avalanche involved and no matter how experienced you are, the mountain doesn't know that," he added.

Mr Moran is also a member of the Torridon Mountain Rescue Team in Scotland, which said: "The Team are deeply concerned by the news that our member, Martin Moran, is missing on Nandi Devi.

"Our thoughts and prayers are with his family and the families of the others missing."

The rest of the group have been named locally as John McLaren, Rupert Whewell and Richard Payne from the UK; US nationals Anthony Sudekum and Ronald Beimel; Australian Ruth McCance and Indian guide Chetan Pandey.

The University of York confirmed one of its lecturers, Dr Richard Payne, had been reported missing after travelling to the Himalayas on a climbing trip.

"We are extremely concerned for his safety," it said in a statement.

The rescue effort began on Saturday when the climbers did not return to their base camp.

"The first aerial recce has concluded," said Mr Jogdanda earlier on Sunday, confirming an avalanche was feared to have caught the group in the area around India's second-highest peak.

He added: "There were only tents spotted, but no human presence. The second helicopter has left for the recce. Chances of survival are bleak."

A team of 10 to 15 rescuers, comprising police, disaster response personnel and administrators, has also fanned out to find survivors, said Tripti Bhatt, an official of the Uttarakhand State Disaster Response Force (SDRF).

Authorities warned it could take days to trek to the area where the missing climbers were last known to have been.

Moran Mountain confirmed on Saturday that it was working with authorities and the British Association of Mountain Guides to "gather information regarding the Nanda Devi East expedition team".

"Out of respect for those involved and their families, we will be making no further comments at this time," it added.

Photos posted to Moran Mountain's Facebook page the day before the start of the climb showed the group "starting their journey into the hills at Neem Kharoli Baba temple, Bhowali".

An update on 22 May, posted from their second base camp at 4,870 metres, suggested that the group would attempt to summit a previously unclimbed peak on the mountain.

The British Foreign and Commonwealth Office (FCO) confirmed it was in contact with Indian authorities about the missing climbers.

"We will do all we can to assist any British people who need our help," a spokesman said.

Nanda Devi is the world's 23rd highest mountain and was first scaled in 1936.

Considered one of the toughest Himalayan peaks to summit, it attracts fewer climbers than other mountains in the region.