A young schoolgirl is among three people who have died after a man began slashing people with a knife on the outskirts of Tokyo. 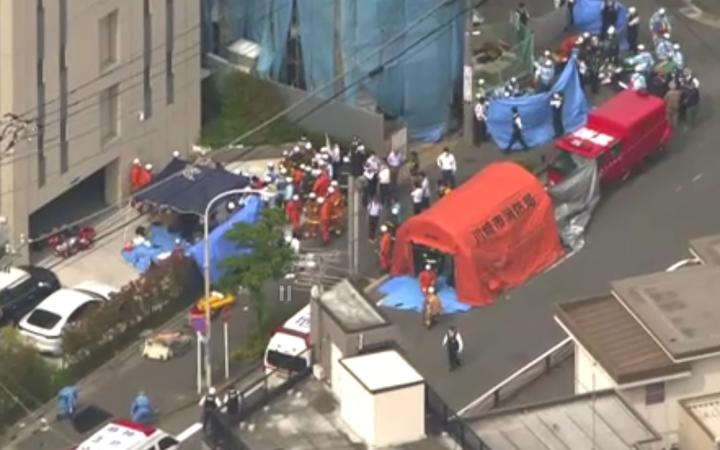 A screen shot of footage from Japan national broadcaster NHK that it says shows the scene of the attack. Photo: Screenshot / NHK

At least 18 people were injured on a residential street in Kawasaki. Two of them, a 12-year-old girl and a 39-year-old man, are dead.

A suspect, a man in his 50s, reportedly stabbed himself in the neck and was later detained. He has now also died from his injuries.

The motive for the attack is unknown.

Sixteen of those injured are said to be schoolgirls, according to news site Kyodo.

Police responding to the incident recovered two knives at the scene, said NHK.

A spokesman for the Kawasaki Fire Department told AFP news agency that an emergency call was received at 7.44am local time stating that a number of schoolchildren had been stabbed.

The attack took place near a local train station, according to reports.

Footage broadcast on local news stations showed emergency services arriving at the scene and setting up medical tents to treat the wounded.

Violent crime is relatively rare in Japan but occasional high-profile incidents have shocked the nation.

In 2010, more than a dozen people were injured in a stabbing spree on a school bus and a commuter bus in a Tokyo suburb.