A former US marine imprisoned in Russia on suspicion of spying has complained of "abuses and harassment" and says he is a "victim of political kidnap". 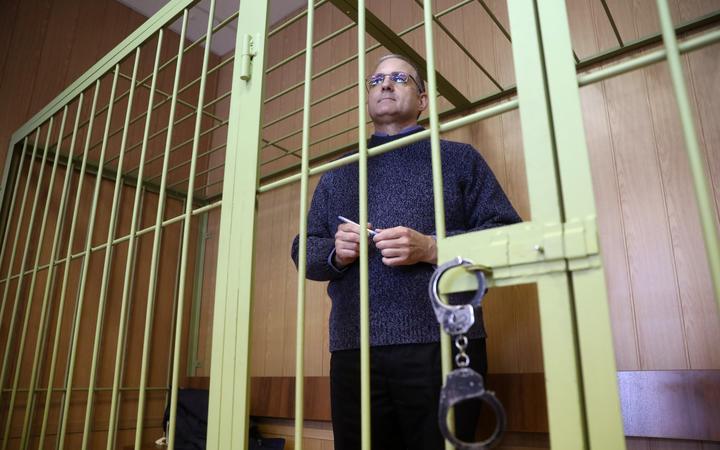 Paul Whelan waits in a courtroom as the court considers an appeal on extending his arrest at the Lefortovsky Court, in Moscow, Russia. Whelan was accused of espionage and detained by the Russian Federal Security Service. Photo: AFP

Paul Whelan - a citizen of the US, UK, Canada and Ireland - was arrested in late December, accused of espionage.

The 48-year-old denies the charges and told a court on Friday that he had been subjected to threats and abuse by a security service investigator.

The comments came as his pre-trial custody was extended until 29 August.

Mr Whelan told the court that there was "absolutely no legitimacy" to the case against him, describing it as retaliation for US sanctions.

If found guilty, he faces up to 20 years in prison.

He said he had not showered in two weeks, was unable to access medical or dental treatment and had been denied access to books and letters sent to him months ago.

Paul Whelan statement in court - he calls this spy case a political kidnap, punishment for sanctions vs Russia pic.twitter.com/WszuagoPGf

The court hearing was held behind closed doors but visitors were permitted to attend the opening and the reading of the ruling.

An official at the US embassy in Moscow said Washington was extremely concerned by Mr Whelan's claims.

The comments marked a shift in tone from previous statements by the former marine, who told the BBC's Sarah Rainsford in February that he was "holding up well" after two months in custody but could not talk publicly about the charge against him for fear of making his situation worse.

Why was he arrested?

Mr Whelan arrived in Russia on 22 December to attend a wedding and had planned to visit St Petersburg in addition to Moscow before flying home on 6 January, his brother told the BBC.

He was arrested in Moscow on 28 December after taking a group of wedding guests on a tour of the Kremlin museums.

Russia's FSB state security agency said he was detained "during an act of espionage".

Mr Whelan's Russian lawyer has said the arrest was made after he was unwittingly handed a memory stick containing state secrets.

Mr Whelan was born in Canada to British parents but moved to the US as a child. He is currently director of global security for Michigan-based automotive components supplier BorgWarner.

His brother has said Mr Whelan had been visiting Russia for business and pleasure since 2007.

He was convicted in a 2008 court martial on charges related to larceny and received a bad-conduct discharge. Details of the charges are not public.