Grumpy Cat, the feline famous on the internet for her permanent scowl, has died aged seven, her owners say. 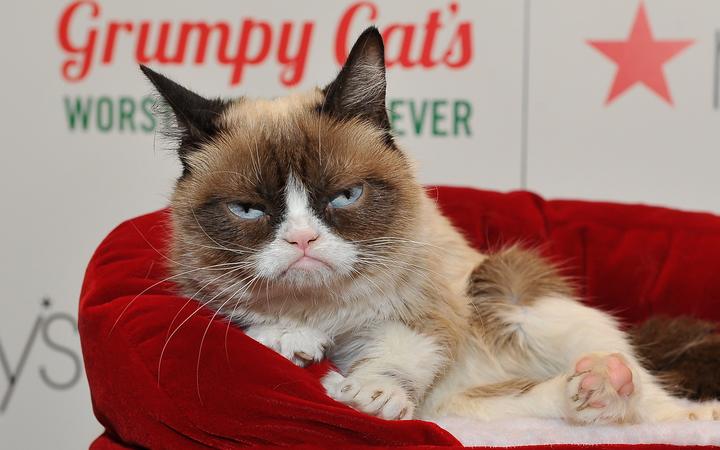 A statement says she died on Tuesday following complications from a recent urinary tract infection.

The cat from Arizona had "helped millions of people smile".

Grumpy, whose real name was Tardar Sauce, went viral in 2012 after photographs of her sour expression emerged online. Her image quickly spread as a meme.

Some days are grumpier than others... pic.twitter.com/ws209VWl97

According to owner Tabitha Bundesen, her facial expression was caused by feline dwarfism and an underbite.

Grumpy Cat travelled the world making television appearances and in 2014 even starred in her own Christmas film.

Madame Tussauds in San Francisco unveiled a waxwork of her in 2015.

Grumpy's face has starred in thousands of memes with many people choosing to share them again after hearing the news of her death.

Still one of my favorite Grumpy Cat Memes. pic.twitter.com/JYDLtsbqVT

Others - including a social media account for cartoon cat Garfield - simply paid tribute.

American actress Aubrey Plaza, who played the voice of the cat in the 2014 film, said her "heart was broken".

my heart is broken. i will miss you grumpy cat. you were and will always be my true spirit animal...whether you like it or not

Grumpy Cat Limited sued the owners of the US coffee company Grenade for exceeding an agreement over the cat's image.

The company only had rights to use the cat to sell its "Grumppuccino" iced drink, but was also selling other Grumpy products.

Ms Bundesen previously worked as a waitress before her beloved pet gained internet stardom. She told the Express newspaper that she quit her job "within days" of Grumpy's first appearance on social media.