The man killed in a crossbow murder-suicide pact in Germany is believed to have led a cultish group devoted to medieval folklore and treated the women around him like slaves, reports say. 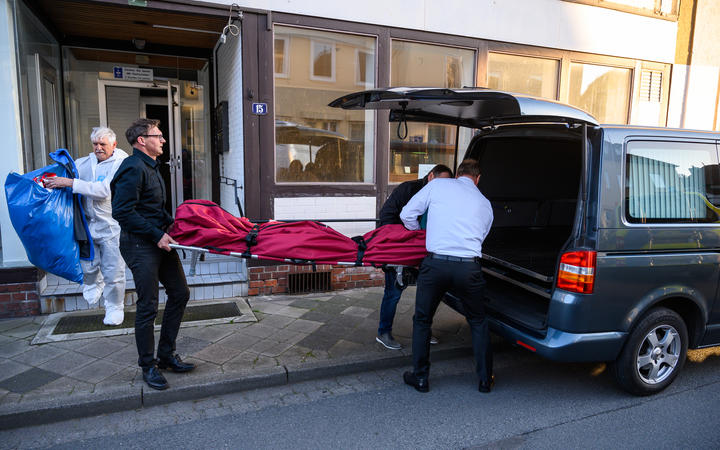 Investigators find two bodies in Lower Saxony. The dead women had been discovered in the apartment of one of the Passau victims in Wittingen in the district of Gifhorn. Photo: Photo / AFP

The bodies of Torsten W and two women were found in a hotel room in Bavaria on Saturday, alongside three crossbows.

The deaths were linked to two more deaths in Germany on Monday.

Torsten W appeared to have controlled the women like an oppressive sect leader, German media reports.

The alleged cult-like leader, 53, and woman, Kerstin E, 33, were found in bed, hand in hand, impaled with arrows from the modern crossbow.

Farina C, 30, who had been hit in the neck with an arrow, was lying on the floor.

The three had checked in on Friday evening, for three nights without breakfast, and the bodies were found by a room maid.

Two wills found in the room were linked to Torsten W and Kerstin E, the prosecutors' spokesman said.

Police are treating the case as a "requested killing and suicide", suggesting Farina C first shot the couple and then herself.

This was followed by the discovery of two more dead women on Monday at the house of Farina C in the town of Wittingen.

One of them, 35-year-old primary school teacher Gertrud C, was the partner of Farina C. The other was a 19-year-old woman, said police, without naming her.

Since the discoveries, disturbing reports have emerged about Torsten W.

He controlled the four women like a cult leader who used physical force and psychological manipulation, according to local media.

"Investigators suspect they were all members of a kind of sex circle with a focus on the Middle Ages. Torsten W may have been the guru of the group," reported RTL after interviewing several people who knew them.

He was apparently "in relationships with several women whom he ruled over like a master," Bild reported.

RTL also spoke with a couple who feared the 19-year-old woman found dead in Wittingen was their daughter Carina U, who they said had fallen under the spell of Torsten W years ago and broken off contact with them.

The once happy girl had met him through martial arts classes and had soon become withdrawn and depressive, the parents said, recalling how she had dyed her hair black and moved out.

The mother recalled how initially Carina "was raving about Torsten, Torsten, Torsten", while the father said that "until today I don't understand how someone manages in four-to-six weeks to manipulate someone like that".

Police say the cause of deaths in Wittingen is as yet unclear, and no crossbows were found at the scene.