US President Donald Trump said he and Russian President Vladimir Putin discussed on Friday the possibility of a new accord limiting nuclear arms that could eventually include China in what would be a major deal among the three atomic powers. 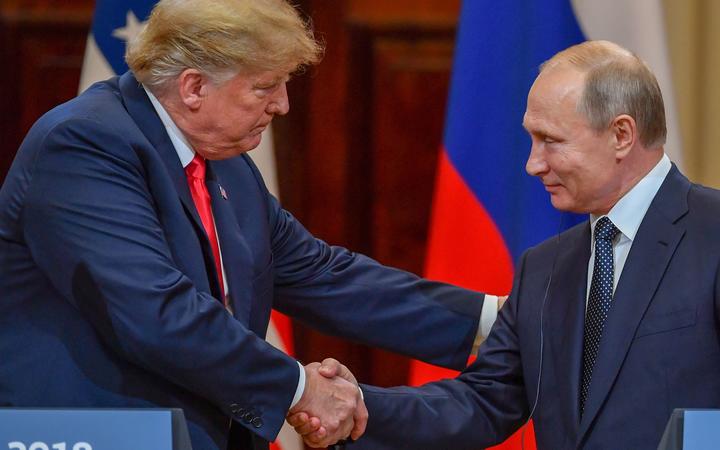 Mr Trump, speaking to reporters as he met in the Oval Office with Peter Pellegrini, Prime Minister of the Slovak Republic, also said he and Mr Putin discussed efforts to persuade North Korea to give up nuclear weapons, the political discord in Venezuela, and Ukraine during a call that stretched over an hour.

Yesterday North Korea fired several short-range missiles from the Hodo peninsula in the east of the country.

The 2011 New START treaty, the only US-Russia arms control pact limiting deployed strategic nuclear weapons, expires in February 2021 but can be extended for five years if both sides agree. Without the agreement, it could be harder to gauge each other's intentions, arms control advocates say.

Mr Trump cited the expense of keeping up the US nuclear arsenal as a motivating factor behind wanting to limit how many weapons are deployed.

"We're talking about a nuclear agreement where we make less and they make less and maybe where we get rid of some of the tremendous firepower that we have right now," he said.

The New START treaty required the United States and Russia to cut their deployed strategic nuclear warheads to no more than 1550, the lowest level in decades, and limit delivery systems - land and submarine-based missiles and nuclear-capable bombers.

It also includes extensive transparency measures requiring each side to allow the other to carry out 10 inspections of strategic nuclear bases each year; give 48 hours notice before new missiles covered by the treaty leave their factories; and provide notifications before ballistic missile launches.

Mr Trump has called the New START treaty concluded by his predecessor, Barack Obama, a "bad deal" and "one-sided".

The Kremlin said the two sides confirmed they intended to "activate dialogue in various spheres, including strategic security".

The two men, who last chatted informally at a dinner of world leaders in Buenos Aires on 1 December, briefly talked about the report by US Special Counsel Robert Mueller that concluded Mr Trump did not collude with Russia during his 2016 presidential campaign.

"He said something to the effect that it started off as a mountain, and it ended up being a mouse. But he knew that because he knew there was no collusion whatsoever. Pretty much that's what it was," he said.

The Kremlin said the call was initiated by Washington. It said the two leaders agreed to maintain contacts on different levels and expressed satisfaction with the "businesslike and constructive nature" of the conversation.

With the US concerned about a Russian military presence in Venezuela at a time when Washington wants Venezuelan President Nicolas Maduro to leave power, Mr Trump told Mr Putin "the United States stands with the people of Venezuela" and stressed he wanted to get relief supplies into the country, White House spokeswoman Sarah Sanders said.

Mr Putin told Mr Trump that any external interference in Venezuela's internal business undermines the prospects of a political end to the crisis, the Kremlin said.

Mr Trump also raised with Mr Putin the issue of getting North Korea to dismantle its nuclear weapons and ballistic missile programmes. Mr Trump has met twice with North Korean leader Kim Jong Un but Mr Kim has yet to agree to a disarmament deal.

Ms Sanders said Mr Trump mentioned several times "the need and importance of Russia stepping up and continuing to put pressure on North Korea to denuclearise". The Kremlin said both leaders highlighted the need to pursue denuclearisation of the region.

During an April summit with Mr Kim in Vladivostok, Mr Putin expressed Russian support for a gradual process of trading disarmament for sanctions relief.