The United Nations will grant Mozambique and the Comoros Islands $US13 million ($NZ19.5m) in emergency funds to help provide food and water and repair damage to infrastructure, after the second cyclone in a month slammed into the region.

Cyclone Kenneth crashed into the northern province of the southern African nation on Thursday just as it was recovering from Cyclone Idai that hit further south last month. 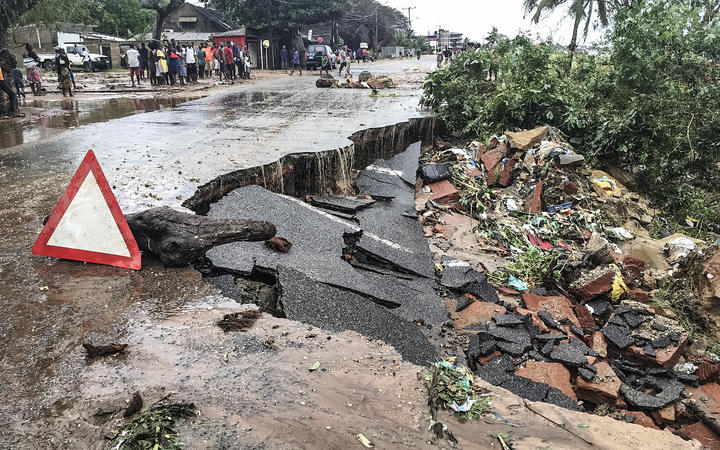 Residents stand next to a road partially destroyed by Cyclone Kenneth. Photo: AFP

Idai, the worst tropical storm to hit the region in decades, moved into neighbouring Zimbabwe and Malawi, killing more than 1000 people.

Weather experts have warned that Kenneth could dump twice as much rain on northern Mozambique as Idai did. It has already killed five people as it unleashed heavy rains and flooding that has seen rivers burst their banks and smash whole villages.

Cyclone Kenneth hit the northern Mozambican province of Cabo Delgado late on Thursday, flattening entire villages with winds of up to 280km/h.

The World Bank estimates Mozambique and other countries affected by the tropical storm will need over $US2 billion to recover.

Mozambique also faces a cholera epidemic after the cyclone wiped out water and sanitation facilities.

"This new allocation of Central Emergency Response Fund funds will help humanitarian partners to scale up the response to address the needs of those most vulnerable in the aftermath of Cyclone Kenneth", said UN Humanitarian Chief Mark Lowcock in a statement.