A Russian agent who tried to infiltrate US political groups has been sentenced to 18 months in prison, telling the court: "I destroyed my own life." 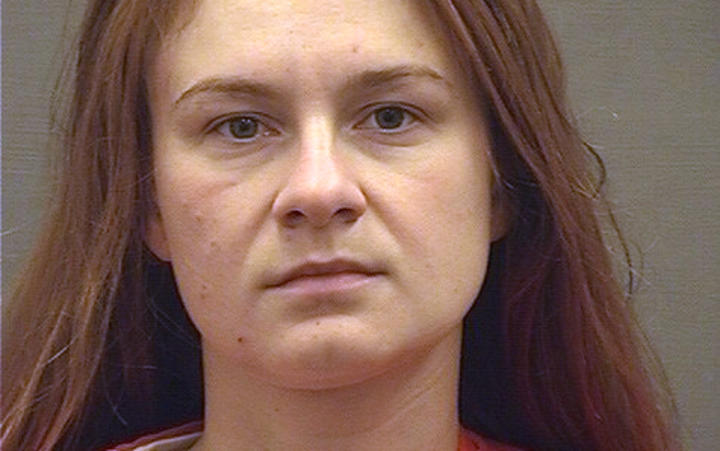 Maria Butina tried to insinuate herself into the National Rifle Association (NRA) in an effort to sway American policies in favour of Moscow.

After pleading not guilty, she later reversed her position, admitting to a single count of conspiracy in December.

The 30-year-old has been in custody since her arrest in July.

Butina will be credited with the nine months she has already served in jail, and will face immediate deportation after her sentence is complete.

Butina told the court in Washington DC on Friday: "My parents discovered my arrest on the morning news they watch in their rural house in a Siberian village.

"I love them dearly, but I harmed them morally and financially. They are suffering from all of that.

"I destroyed my own life as well. I came to the United States not under any orders, but with hope, and now nothing remains but penitence."

Despite prosecutor's claims that she damaged US national security, Butina said that she had no intention of harming the American people.

Her sentencing came on the same day that US President Donald Trump travelled to speak at the NRA convention in Indianapolis.

But the judge was reportedly unmoved by Butina's apology, saying that her actions "jeopardised" national security.

Despite Butina's plea for leniency, the judge fully complied with the government's sentencing recommendation.

"This was no simple misunderstanding by a overeager foreign student," Judge Chutkan said.

At the end of the hearing, Judge Chutkan wished Butina well.

"You are a young woman, you are smart, you are hard working," Judge Chutkan said to Butina: "I wish you the best luck."

Federal prosecutor Erik Kenerson described Butina as an agent of a foreign government with "undoubtedly serious" intentions, though stopped short of calling her activities espionage.

"While it is certainly true that the defendant was an American university student," Mr Kenerson said: "She did this for the benefit of the Russian Federation."

As part of a plea deal, Butina had agreed to co-operate with investigators. Judge Chutkan noted that Butina had provided "substantial assistance" to law enforcement.

Prosecutors said they expected the deal would provide information about Russia's efforts to interfere in US politics.

Authorities said Butina was directed by a senior Russian official to infiltrate conservative political groups, including an unnamed pro-gun lobbying organisation presumed to be the NRA, which is allied with Mr Trump's Republican party.

In her plea agreement, Butina admitted to working with former Russian lawmaker Alexander Torshin to infiltrate the NRA and pursue backdoor channels of communication to American conservatives who could influence US politics.

While doing so, Butina failed to report her activities to US authorities, as required by law.

She had faced a maximum of five years in prison.

The case has no connection with the Mueller inquiry into alleged Russian meddling in the 2016 presidential election.

In a statement read in court, one of the prosecutors said Butina had drafted, in March 2015, a document called "Diplomacy Project" that called for unofficial communication lines between high-ranking US officials and Russia.

She acknowledged that she worked with two Americans and a Russian official.

The Russian Embassy in Washington said on its Facebook page that Butina was a "political prisoner" and demanded her immediate release. The post was accompanied by the hashtag "Free Maria Butina."

The Russian government has previously described the case as "fabricated".