At least 29 people have died after a bus carrying German tourists plunged off a road and overturned on the Portuguese island of Madeira. 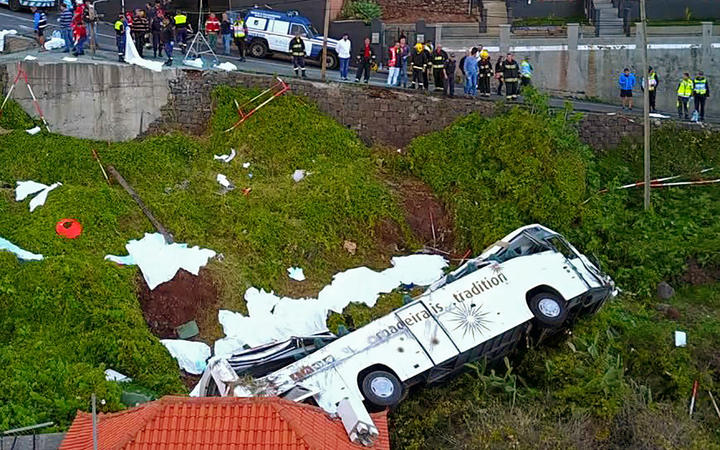 Wreckage of a tourist bus that crashed. Photo: AFP

Another 27 were injured in the accident near the town of Caniço.

The accident happened at 6.30pm (5.30am NZT) when the driver lost control of the bus at a junction and went off the road, according to Portuguese news agency Lusa.

The vehicle eventually came to rest on the roof of a house.

"I have no words to describe what happened. I cannot face the suffering of these people," local Mayor Filipe Sousa told broadcaster SIC TV.

He said all the tourists on the bus were German but some local people could also be among the casualties. Eleven of the fatalities were men and 17 women, Mr Sousa added. The bus was reported to be carrying 55 passengers, as well as the driver and a tour guide.

Another woman later died of her injuries in hospital.

The vice-president of Madeira's regional government Pedro Calado said the bus met safety standards and so it was "premature to talk about what caused the crash".

Portuguese President Marcelo Rebelo de Sousa is flying to the island to visit the scene, the agency said.

The German government spokesman Steffen Seibert tweeted: "Our deep sorrow goes to all those who lost their lives in the bus accident, our thoughts are with the injured."

Madeira was the scene of another fatal bus crash in 2005 when five Italian tourists died in São Vicente, on the northern coast.