The heads of two major central banks in the world have written a stark warning about the financial risks of climate change. 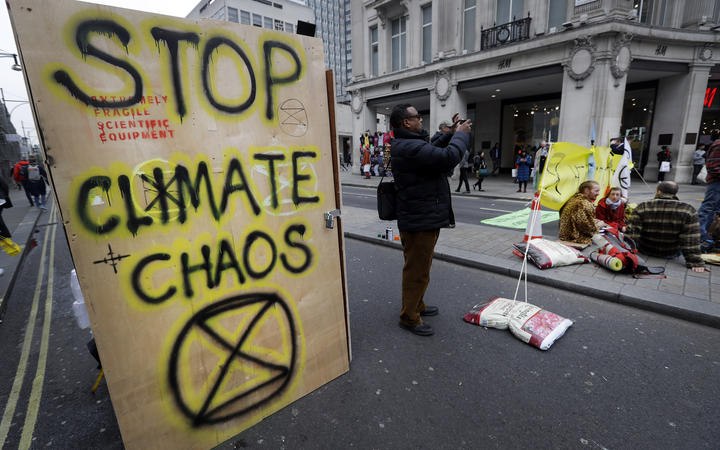 Writing on the side of a temporary toilet set up as the road is blocked during a climate protest at Oxford Circus in London, 16 April, 2019. Photo: AP /Kirsty Wigglesworth

Bank of England governor Mark Carney and France's François Villeroy de Galhau set out the dangers to the global economy in an open letter.

"If some companies and industries fail to adjust to this new world, they will fail to exist," they wrote.

The letter was co-signed by the chair of the climate-focused Network for Greening the Financial System (NGFS).

The NGFS is a coalition of 34 central banks which was formed in 2017, with the Bank of England as a founding member. It released its first major report into climate-related financial risks on 17 April.

In the letter, Mr Carney and Mr Villeroy de Galhau describe "the catastrophic effects of climate change" already having an impact on the planet, such as "blistering heatwaves in North America to typhoons in south-east Asia and droughts in Africa and Australia".

The NGFS elaborates in its "call to action" report, saying that climate change will lead to "disruptive events such as mass migration, political instability and conflict".

This is why world leaders signed the Paris climate agreement in 2015 and committed to reducing their respective countries' carbon emissions, the letter continues, in order to limit the global temperature rise to well below 2 degrees Celsius.

"But this transition brings its own risks," NGFS said.

The NGFS sets out three climate-related financial risks that companies, banks and governments need to fight against.

It is the second risk in particular - of switching to a green economy without proper planning - that Mr Carney and Mr Villeroy de Galhau focus on in their letter.

"Carbon emissions have to decline by 45% from 2010 levels over the next decade in order to reach net zero by 2050. This requires a massive reallocation of capital," the letter said.

The full NGFS report states that "while urgent action is desirable, an abrupt transition could also have an impact on financial stability and the economy more broadly".

"The speed and timing of the transition is crucial.

"An orderly scenario, with clear policy signalling, would allow adequate time for existing infrastructure to be replaced and for technological progress to keep energy costs at a reasonable level.

"In contrast, a disorderly, sudden, uncoordinated, unanticipated or discontinuous transition would be disruptive and costly, particularly for those sectors and regions that are more vulnerable to structural change."

Companies and industries that do not adjust or properly plan for these changes, Mr Carney and Mr Villeroy de Galhau say, "will fail to exist".

So what do they propose?

They also say that central banks should "lead by example" by making their own operations more sustainable.

But most importantly, they call for more collaboration within the financial sector, with different companies and bodies sharing information about how they are dealing with these climate risks.

"An important element to achieving effective consideration of climate risks across the financial system is to support internal and external collaboration," they write.

The NGFS has also called for regulators to come up with a classification system that shows exactly "which economic activities contribute to the transition to a green and low-carbon economy".

"We need collective leadership and action across countries and we need to be ambitious," they add.

"The NGFS is the core of the response of central banks and supervisors. But climate change is a global problem, which requires global solutions, in which the whole financial sector has a crucial role to play."