All the latest world news in one place, brought to you by the RNZ news team. 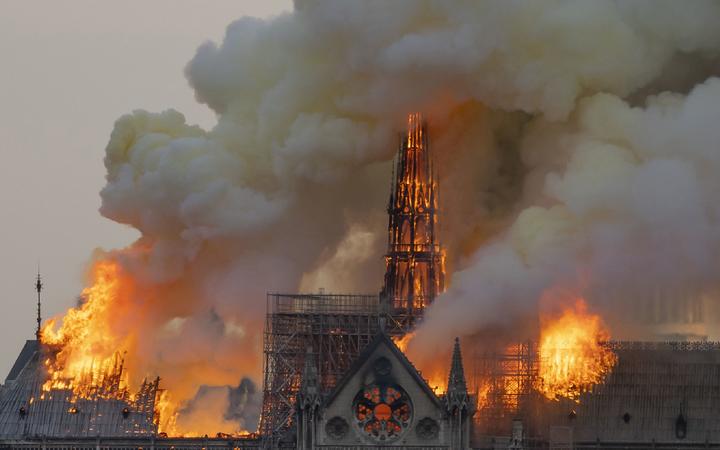 French President Emmanuel Macron has vowed to rebuild the medieval cathedral of Notre-Dame after a major fire partially destroyed the Paris landmark.

Firefighters managed to save the 850-year-old Gothic building's main stone structure, including its two towers, but the spire and roof collapsed.

Authorities have confirmed that two of the Cathedral's most prized artefacts - the Crown of Thorns and the Tunic of Saint Louis - have been saved.

The cause is not yet clear but officials say it could be linked to extensive renovation works under way.

And authorities have confirmed that two of the Cathedral's most prized artefacts - the Crown of Thorns and the Tunic of Saint Louis - have been saved.

The number of measles cases reported worldwide so far this year has tripled compared to the same period last year.

The World Health Organisation said all regions of the world have experienced outbreaks.

Africa witnessed the most dramatic rise with cases up by 700 percent.

Ukraine, India and Madagascar have been worst affected by the disease with tens of thousand of reported cases.

In Madagascar 800 people have died since September.

In New York city a public emergency has been declared and residents in a part of Brooklyn have been told to get vaccinated or face fines.

The US Department of Justice said it's planning to release a redacted version of the report into Russian election interference on Friday.

Both Congress and the public will have access to the document.

The Special Counsel, Robert Mueller, looked into allegations that the Kremlin interfered in the 2016 presidential election.

In his letter summarising the finding, the Attorney General, William Barr, said the report didn't find that the Trump campaign had colluded with Russian agencies

Ecuador says hacking attempts on the country's government institutions have soared since the country revoked the asylum of the WikiLeaks founder, Julian Assange.

Last week Ecuador revoked his asylum protection and he was taken into custody.

The Ecuador government said the president, central bank and foreign ministry are among those targetted by up to 40 million hacking attempts a day since Mr Assange was removed from the embassy.

Bittersweet Pulitzer for US newspaper

A US newspaper has won a prestigious Pulitzer Prize for journalism for its coverage of a mass shooting in its own newsroom.

The Capital Gazette in Annapolis Maryland, won a special Pulitzer for its courage in the face of one of the deadliest attacks on journalists in American history.

In June last year a gunman burst into the paper's newsroom, killing five people, but staff still managed to publish a newspaper on schedule the next day.

A man with a longstanding grudge against the newspaper has been charged over the attack.

Up to 17.4 million Americans watched the first episode of the final season of television's Game of Thrones - a record audience for the medieval fantasy series.

The cable channel HBO said yesterday's live US television audience and viewers on its apps exceeded the previous series high of 16.9 million viewers for the Season 7 finale, two years ago.

On social media, it was also the most-tweeted-about episode of the show ever, with more than 5 million Tweets.

Game of Thrones is available in over 150 countries, but HBO says viewing data is not easily retrieved in many of those markets, making a global figure impossible to calculate.