Donald Trump's pick for World Bank president, David Malpass, has officially been approved for the role. 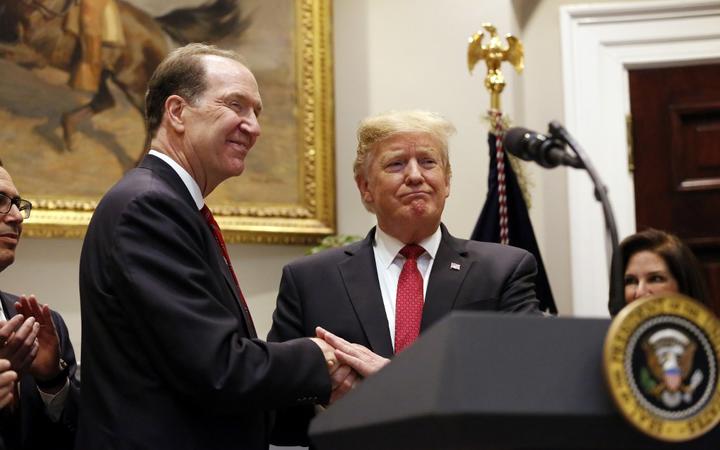 Mr Malpass, a Trump loyalist, was a senior economic adviser to the United States president during his 2016 election campaign.

His appointment has stirred debate, as some worry that Mr Malpass, a critic of the bank, will seek to reduce its role.

In February White House officials said Mr Malpass, a long-time Republican, would be a "pro-growth reformer".

The former Bear Sterns economist has criticised the World Bank in the past, along with other multilateral institutions such as the International Monetary Fund (IMF), for being "intrusive" and "entrenched".

'Not willing to fight'

To become World Bank president Mr Malpass won unanimous approval from the institution's executive board, which has 25 members.

The US holds a 16 percent share of board voting power and has traditionally chosen the World Bank's leader.

China is the World Bank's third-largest shareholder after Japan, with about a 4.5 percent share of voting power.

Professor Christopher Kilby, an expert on the economics of foreign aid at Villanova University near Philadelphia, said it is likely that China and other shareholders did not push back on Mr Malpass' appointment as they "recognise that they are unlikely to succeed in derailing the US nominee".

"Since they have seen President Trump punish those who stand up to him, they are not willing to fight the US," Prof Kilby said.

In the past China has also not sought more power within the World Bank as some of its aims, including promoting the rights of indigenous peoples, do not align with Chinese domestic and foreign policy, Prof Kilby said.

The World Bank critic could narrow the focus of its lending to the world's poorest countries, among other changes.

He has pushed for the World Bank to halt lending to China, which he says is too wealthy to deserve such aid. And last year, he was part of negotiations over a package of World Bank lending reforms.

The US agreed to back a plan for shareholders to inject $US13 billion ($NZ19.3b) into the World Bank and its private lending arm, with conditions that aimed to limit the bank's lending, and focus resources more on poorer countries.

Traditionally, the US picks the World Bank president, Europeans choose the IMF managing director, and the Japanese do the same for the Asian Development Bank.

Prof Kilby said a more controversial US pick for the World Bank president role was neoconservative Paul Wolfowitz, and yet he still landed the role.

Mr Wolfowitz, who had the job between 1 June 2005 and 30 June 2007, was seen as a driving force behind pursuing the US-led conflict in Iraq. "For this and other reasons, Mr Wolfowitz was unacceptable to the Europeans and there was push back, including other nominees, for a while," Prof Kilby said.

"But as the election date drew near, the fear that this would threaten the European traditional right to pick the head of the IMF led the European countries to back down and accept the US pick," he added.