A United Nations court has rejected an appeal by the former Bosnian Serb leader Radovan Karadzic increased his sentence to life in prison. 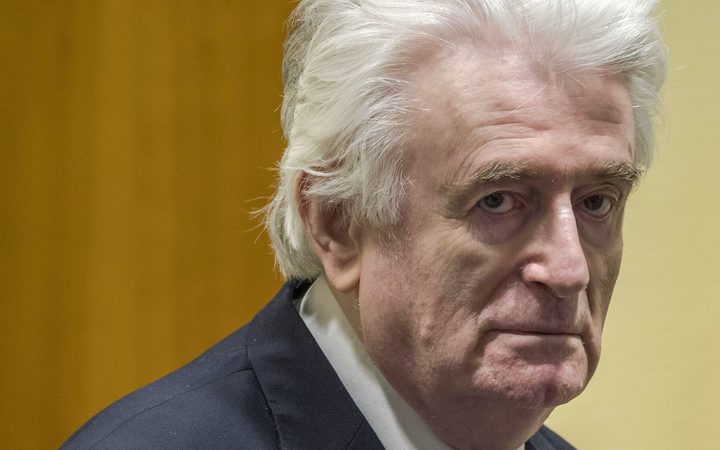 Radovan Karadzic in court in The Hague. Photo: AFP

Karadzic launched the appeal against his sentence last year, telling judges that the expulsion of Muslims and Croats in the 1990s was a "myth".

In 2016 Karadzic, 73, was found guilty of genocide and war crimes by a UN tribunal in The Hague and given a 40-year prison sentence.

He planned the Srebrenica massacre of July 1995 - the worst atrocity in Europe since World War II.

Karadzic had said his conviction was based on "rumours". He launched an appeal against his sentence last year, telling judges that the expulsion of Muslims and Croats in the 1990s had been "myths".

Karadzic, a former psychiatrist, was president of the Bosnian Serb entity Republika Srpska during the Bosnian War in the 1990s.

The tribunal rejected the majority of Karadzic's appeal.

Judge Vagn Joensen said the original sentence was too lenient, given the "sheer scale and systematic cruelty" of his crimes.

The former leader cannot appeal the tribunal's decision. He sat in the chamber on Wednesday and did not react to the ruling.

Correspondents say the ruling is likely to be one of the last remaining hearings stemming from the bloody break-up of the former Yugoslavia in the 1990s.

In its original verdict, the UN tribunal ruled that Karadzic and other leaders were responsible for the "organised and systematic pattern of crimes committed against Bosnian Muslims and Bosnian Croats".

At Srebrenica, Bosnian Serb soldiers slaughtered nearly 8,000 Muslim men and boys in a "safe area" protected by Dutch peacekeeping forces for the UN.

Judges also held Karadzic responsible for the siege of Sarajevo, a campaign of shelling and sniping which lasted more than three years and led to the deaths of an estimated 10,000 civilians.

After the war, Karadzic hid for years masquerading as an expert in alternative medicine before his eventual arrest in Serbia in 2008.

Former Bosnian Serb army commander Ratko Mladic was sentenced to life in prison on similar charges of war crimes and genocide in November 2017.