A former British soldier faces murder charges over the killing of two people on Bloody Sunday in Londonderry in 1972. 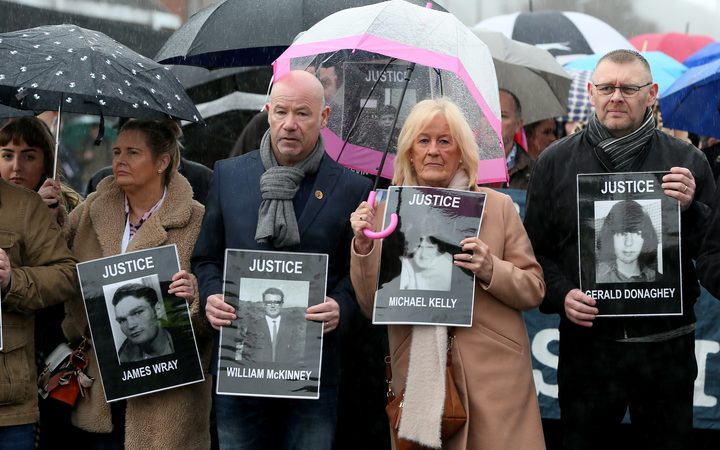 Relatives and supporters of the victims of the 1972 Bloody Sunday killings hold images of those who died. Photo: AFP

The Public Prosecution Service said there was enough evidence to prosecute Soldier F for the murders of James Wray and William McKinney.

The sole prosecution is seen as a "terrible disappointment" by some of the families of the 13 people killed.

The day became known as Bloody Sunday - one of the darkest days of the Northern Ireland Troubles.

The shootings led to widespread anger in Derry and further afield.

On the same day as the funerals were held for 11 of the Bloody Sunday victims, the British Embassy in Dublin was burned to the ground by an angry crowd.

The former paratrooper is being referred to only as Soldier F because all military witnesses were granted anonymity through the Saville Inquiry into the circumstances around the killings.

The PPS said there was insufficient evidence to prosecute 16 other soldiers and two Official IRA men.

James Wray's brother Liam said he was "very saddened for the other families" of those killed on Bloody Sunday.

"Their hearts must be broken," he said. "It has been a sad day but the Wray family are relieved."

He added: "There are a lot of sad and heartbroken people today."

William McKinney's brother Michael said it was "disappointing" for families who had not received news of prosecutions.

Director of the PPS Stephen Herron said: "It has been a long road for the families... and today will be another extremely difficult day for many of them.

"We wanted to meet them personally to explain the decisions taken and to help them understand the reasons."

Linda Nash, whose brother William was shot dead, said she feels "let down by a law and a justice system that's supposed to protect people".

"I'm feeling devastated. The most difficult thing I had to do today was to call my children and tell them that there are no prosecutions for their granda and uncle."

Her sister Kate said they would appeal the decision. 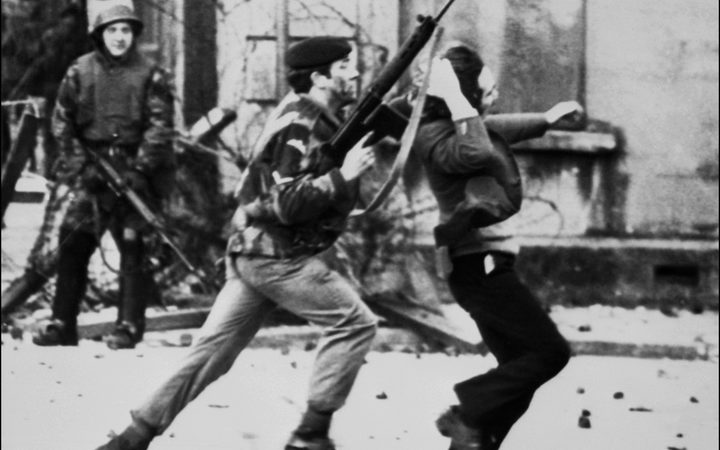 In this file photo taken on January 30, 1972, a British soldier is pictured draging a Catholic protester during the "Bloody Sunday" killings. Photo: AFP

Soldier F - what we know

His assertion that there were "gunmen and bombers killed" was rejected in Lord Saville's report.

The Saville Inquiry stated that there was "no doubt" Soldier F had shot father-of-six Paddy Doherty, who was unarmed.

Saville also found there was "no doubt" Soldier F had shot an unarmed Bernard McGuigan on Bloody Sunday as he went to the aid of Patrick Doherty, waving a white handkerchief.

At the Saville Inquiry, Soldier F admitted he had shot 17-year-old Michael Kelly - but he said that he had only fired at people with bombs or weapons.

The Saville Inquiry found that both William McKinney and James Wray could have been shot by Soldier F and three other soldiers.

The inquiry report also stated Soldier F had changed his story over the years.

Mr Herron said the decisions to prosecute announced on Thursday "relate only to allegations of criminal conduct on Bloody Sunday itself".

"Consideration will now be given to allegations of perjury in respect of those suspects reported by police," he said.

The case could come before a court for a preliminary hearing quite quickly, says the legal expert, Joshua Rozenberg.

He expects Soldier F to be brought before a court in Northern Ireland and to be named.

"We are indebted to those soldiers who served with courage and distinction to bring peace to Northern Ireland," he said. "The welfare of our former service personnel is of the utmost importance."

He said the the Ministry of Defence is working "to drive through a new package of safeguards to ensure our armed forces are not unfairly treated."

"And the government will urgently reform the system for dealing with legacy issues," he said.

"Our serving and former personnel cannot live in constant fear of prosecution."

A public inquiry conducted by a senior judge in 1972 was branded a whitewash by victims' families.

After decades of campaigning, a fresh inquiry was eventually ordered by then prime minister Tony Blair in 1998.

Lord Saville's 5,000-page report stated none of the casualties was posing a threat of causing death or serious injury and that soldiers had lost their self-control.

The prime minister at the time of the report's publication, David Cameron, apologised for the soldiers' conduct, saying the killings were unjustified and unjustifiable,

A file was sent to the Public Prosecution Service (PPS) in November 2016.

In total, police reported 20 suspects to the PPS - 18 of them former soldiers, one of whom died last year.

The march began shortly after 15:00 GMT on 30 January 1972, and the intended destination was the city centre.

The majority of demonstrators were instead directed towards Free Derry Corner in the Bogside.

After prolonged skirmishes between groups of youths and the Army, soldiers from the Parachute Regiment moved in to make arrests.

Just before 16:00, stones were thrown and soldiers responded with rubber bullets, tear gas and water cannon. Two people were shot and wounded.

At 16:07, paratroopers moved to arrest as many marchers as possible.

According to Army evidence, 21 soldiers fired their weapons, discharging 108 live rounds between them.