Chancellor Philip Hammond has signalled his backing for a cross-party consensus over Brexit, despite the PM still appearing to support her own deal. 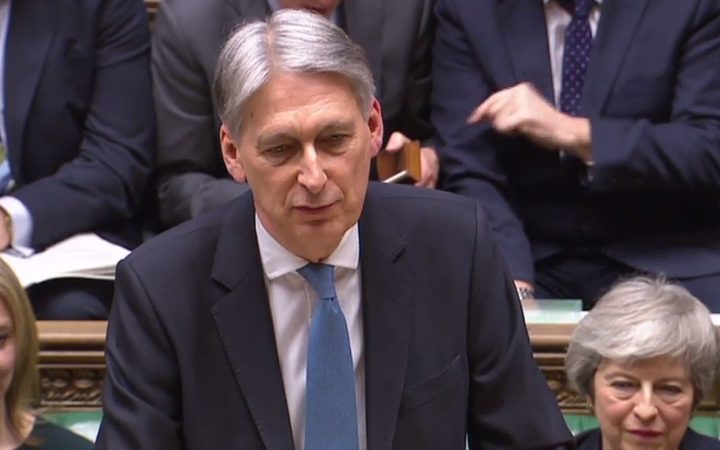 He told MPs they had "a solemn duty in the days ahead to put aside our differences and seek a compromise".

It came after Prime Minister Theresa May said the UK could still leave the EU with a "good deal", despite MPs rejecting her plan.

Battling a sore throat, she said: "I may not have my own voice but I understand the voice of the country."

Labour Party leader Jeremy Corbyn has called on the Mrs May to change course after her deal was "decisively rejected" by 149 votes on Tuesday.

The Labour leader repeated his calls for Mrs May to "move on from her red lines" and suggested his alternative plan to remain in a customs union was "the only show in town".

The BBC's assistant political editor Norman Smith said the chancellor's comments are likely to be seen as support for moves by senior cross-party MPs to forge an alternative Brexit agreement.

This could include holding a series of indicative votes on different options, which would show what next steps MPs would be prepared to back.

Shadow chancellor John McDonnell said Mr Hammond's comments showed the government was being forced to "look seriously" at his party's proposals - which also include closer ties to the single market.

After Tuesday's defeat, the EU's chief negotiator, Michel Barnier, said the bloc "cannot go any further" in trying to persuade MPs to back the agreed terms of exit and it was down to the UK to sort out.

What will happen in the Commons tonight?

This evening, MPs will vote on whether to block the UK from leaving the EU without an agreement later this month.

If the government motion passes, the block on no-deal would only apply to the 29 March deadline.

It wouldn't rule out the prospect of a no-deal exit later this year, if Parliament is ultimately unable to agree a way forward.

Two amendments were also chosen by the Speaker John Bercow to be put to the Commons:

Dame Caroline then told the Commons she wanted to withdraw the amendment, because the government motion would do the same job.

But she was told by Mr Bercow that she could not withdraw it because other supporters of the amendment could "persist with it".

The prime minister has said she will vote to rule out a no-deal, as per her own motion, but she has promised a "free vote" - meaning party bosses will not tell MPs which way to vote.

There will also be a free vote allowed on the Malthouse Compromise, which was tabled by a group of both Remain and Leave-backing Tory MPs.

Chief Secretary to the Treasury, Liz Truss, has already said she will vote in the opposite way, telling BBC Two's Politics Live that a no-deal Brexit was not the "optimal scenario", but it had to be left on the table.

Delivering his Spring Statement to the Commons, Mr Hammond called on MPs across the Commons to "remove the threat of an imminent no-deal exit hanging over our economy" in the vote later.

He said the uncertainty that the possibility of a no-deal Brexit brought was damaging the UK economy, and the country's "standing and reputation in the world".

But the chancellor then moved on to talk about a further vote that could take place on Thursday.

If MPs vote against a no deal later, the prime minister has said a motion would be tabled the following day allowing MPs to vote for an extension to Article 50 - the legal mechanism that sees the UK leaving the EU on 29 March.

Mr Hammond said: "Tomorrow [Thursday], we will have the opportunity to start to map out a way forward towards building a consensus across this House for a deal we can collectively support to exit the EU in an orderly way, to a future relationship that will allow Britain to flourish, protecting jobs and businesses."

He added that, while he had hoped MPs would reach a consensus during Tuesday's vote on Mrs May's deal, he was "confident that we, as a House, will do it over the coming weeks".

Asked after the statement if the chancellor was setting out an alternative way forward from the prime minister, his spokeswoman insisted he "wasn't indicating directionality".

But when pushed, she added: "He's backed the deal up to now, the way forward will involve compromise.

"He believes compromise is the spirit in which we all have to try to find a way forward."

Shadow chancellor John McDonnell told reporters that the government was "coming up to our agenda".

"All the way along we have been there with our proposals and now they are being forced to look at it seriously.

"I think the Cabinet and the Tory party are fracturing over where to go next and some of them may well now look seriously at our proposal."

He also said Mrs May should meet Mr Corbyn again, saying: "I think the onus is upon the government now to start talking to people."

But Liz Truss denied the chancellor had given up on the prime minister's deal and was instead seeking a consensus with Labour on a softer Brexit.

"Philip Hammond doesn't give up," she said. "I don't believe he has given up on that."

A No 10 source told the Press Association said Mr Hammond was "consistent" with what the prime minister has said, adding: "He clearly believes, as she does, that the best outcome for the country is to leave with a deal."

What would UK do in no-deal scenario?

Ahead of the no-deal Commons vote, the government announced that most imports into the UK would not attract a tariff in the event of a no-deal Brexit.

Under a temporary scheme 87 percent of imports by value would be eligible for zero-tariff access - up from 80 percent at present. Tariffs would be maintained to protect some industries, including agriculture.

The government also announced it will not introduce any new checks or controls, or require customs declarations for any goods moving across the border from Ireland to Northern Ireland if the UK leaves the EU without a deal.

The decision to drop all checks to avoid friction at the UK's land border with the EU will be temporary while longer term solutions are negotiated.