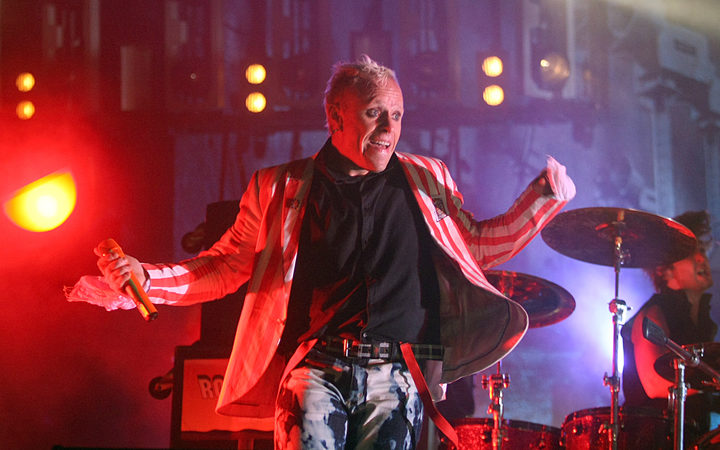 Instantly recognisable by his fluorescent spiked hair and known for high-octane performances, Flint sang lead vocals on both the band's number one singles, Breathe and Firestarter.

He was found dead at his home in Dunmow, Essex, on Monday morning.

The band, who were due to tour the US in May, confirmed his death in a statement, remembering Flint as a "true pioneer, innovator and legend".

In a post on The Prodigy's official Instagram account, bandmate Liam Howlett added: "I can't believe I'm saying this but our brother Keith took his own life over the weekend.

Fans and friends flooded Twitter with tributes as news of the death spread.

The Chemical Brothers' Ed Simons remembered him as "a great man" who was "always great fun to be around".

BBC Radio 2 DJ Jo Whiley described Flint as "an absolute sweetheart" and "iconic front man". And dance duo Chase & Status said: "We wouldn't be here if it wasn't for Keith and the life-changing music they made and championed."

Born Keith Charles Flint on 17 September 1969, the singer had an unhappy childhood in Braintree, Essex, feuding with his parents, who split when he was young.

It is with deepest shock and sadness that we can confirm the death of our brother and best friend Keith Flint. A true pioneer, innovator and legend. He will be forever missed.
We thank you for respecting the privacy of all concerned at this time. pic.twitter.com/nQ3Ictjj7t

A bright boy with dyslexia, he was disruptive in class, and was thrown out of school at the age of 15.

Finding work as a roofer, he immersed himself in the acid house scene of the late 80s - meeting Howlett at an open-air rave in 1989.

Impressed by Howlett's DJ skills, he approached him and asked for a personalised mixtape. Howlett obliged, scoring the word "Prodigy" on the cover in reference to his favourite synthesiser and putting a selection of his original songs on the B-side.

Flint was so impressed that he encouraged Howlett to pursue music professionally, offering up his services as a dancer.

"I was never the brains behind the band - that was always Liam. But together we were a complete package. It was the outlet I was looking for."

Completed by Leeroy Thornhill, The Prodigy scored early hits with Everybody In The Place, Out Of Space and Charly - which sampled the dialogue from an old children's safety film: "Always tell your mummy before you go off somewhere."

Their music matured on their second album, Music For The Jilted Generation, which saw Howlett incorporate breakbeats, guitar loops and hip-hop samples on tracks such as No Good (Start The Dance) and Voodoo People.

The album was nominated for a Mercury Music Prize - but the band truly went global when Flint grabbed the mic and unleashed the full fury of his voice on the abrasive, in-your-face rave-rock anthem Firestarter.

The lyrics - "I'm the firestarter / Twisted firestarter" - were the first he'd written for the band.

"It didn't really have anything to do with starting fires," he told the BBC in 1996.

"It was when you're in front of 5000 people and you can go out there - and just with the aid of the music and a visual performance, you can stir all them people up into a frenzy and that's almost like starting a massive fire, or a riot."

Firestarter's black-and-white video, featuring a headbanging Flint in an abandoned Tube station, was blacklisted by the BBC after it was shown on Top of the Pops and parents complained it had frightened their children (a truncated version was shown subsequently).

Despite that, it knocked Take That's How Deep Is Your Love off the top of the charts, in 1996, selling more than 600,000 copies in the UK alone.

Spurred by its success, the band's third album, Fat of The Land, went to number one in both the US and UK, selling several million copies worldwide.

Flint stepped up as a frontman, giving The Prodigy a focal point for their live shows - including a notable headline slot at the Glastonbury Festival in 1997.

Festival organiser Emily Eavis called it a "huge, unforgettable moment" - paying tribute to Flint on Twitter following his death - and revealed that The Prodigy had been booked for this year's event.

Following the success of Fat of the Land, the band faltered.

Howlett disowned the single Baby's Got A Temper, which included a controversial lyric about the "date rape" drug Rohypnol, while Flint recorded a largely forgotten solo album, Device #1, in 2003.

While remaining part of the band, Flint did not feature on their 2004 album, Always Outnumbered, Never Outgunned, on which vocal duties were handled by Liam and Noel Gallagher and actress Juliette Lewis, among others.

During this period, Flint said he had depression and formed a worrying dependence on prescription drugs.

"I'd line up rows of pills and just take them and take them and I'd lose track of how many until I passed out," he told The Times in 2009.

He decided to get clean after meeting Japanese DJ Mayumi Kai, giving up drugs, cigarettes and alcohol around the time of their marriage, in 2006.

Three years later, The Prodigy regrouped and returned to their classic sound, on the album Invaders Must Die.

The first single, Omen, was a major success, and the band returned to festival stages and stadiums around the world.

Their most recent album, No Tourists, went to number one last November.

Flint was also a keen motorcyclist and had his own team - Team Traction Control - which has won four Isle Of Man TT races.

He had recently wrapped up a tour with The Prodigy in Australia and was due to join them in the US in May.

In a statement, Essex police said: "We were called to concerns for the welfare of a man at an address in Brook Hill, North End, just after 08:10 on Monday, 4 March.

"We attended and, sadly, a 49-year-old man was pronounced dead at the scene. His next of kin have been informed.

"The death is not being treated as suspicious and a file will be prepared for the coroner."