Wildlife experts are searching for clues following the discovery of a dead humpback whale in the Amazon jungle - about 15 metres from the ocean. 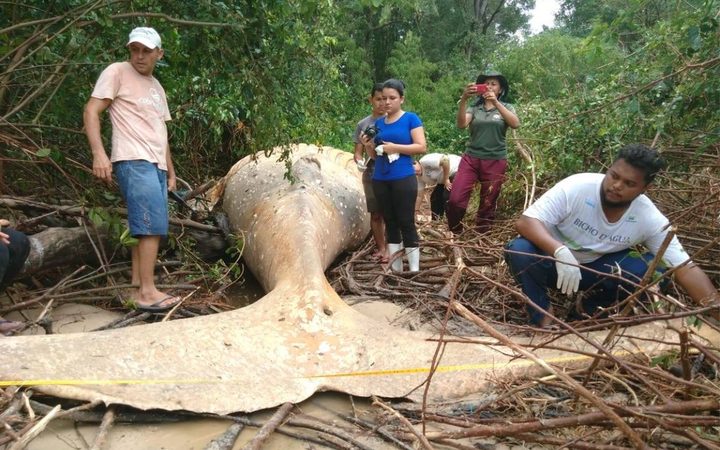 In a post on social media, the Bicho D'agua Institute shows a dead humpback whale in the Amazon jungle. Photo: Facebook / Bicho D'agua

The mammal, which biologists believe to be a 12-month-old calf, was found in undergrowth on the Brazilian island of Marajo, at the mouth of the Amazon River.

In a post on social media, the Bicho D'agua Institute - an NGO working on Marajo Island - said the animal may have already been dead when it was washed ashore during strong tides, before coming to rest in mangroves some distance away from the shoreline.

"The carcass was found about 15 metres from the beach," the organisation wrote.

"[It was] a puppy, about a year old and eight metres long."

A group of 10 biologists from the organisation have since collected samples from the carcass in a bid to determine how the animal died.

Believe it or not, it is not the first time a whale has turned up in the Amazon region.

In 2007, a 5.5m minke whale was freed - and later died - after becoming stranded on a sandbar near the Brazilian city of Santarem, about 1600km from the Atlantic Ocean.

It is believed the animal made its way up the region's river system before becoming beached.

Experts said the whale probably became disoriented among the many river branches that form the broader Amazon.