A fire has engulfed a dormitory at the youth team training centre of one of Brazil's biggest football clubs, killing 10 teenage players. 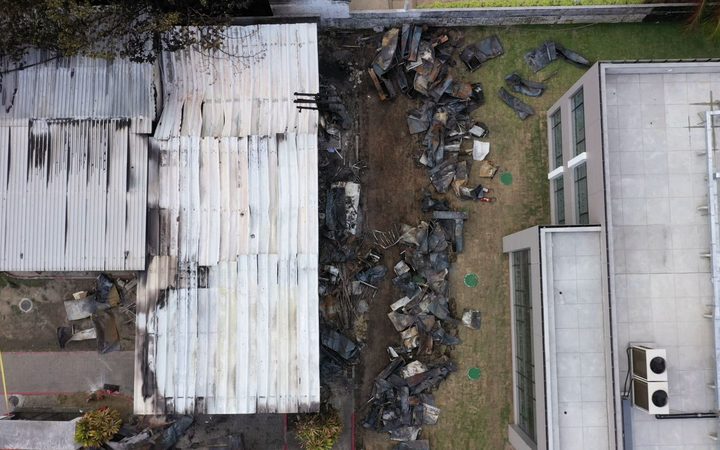 The victims were all staying at Ninho de Urubu, the training ground of Flamengo football club in Rio de Janeiro.

Three teenagers were also injured, one of them seriously. He has been taken to hospital for specialist treatment.

An investigation has been launched into the cause of the blaze.

However, local media report that the accommodation area was officially licensed by the state as a car park.

One young player said the fire started in an air conditioner in his room.

"The air conditioner caught fire and I ran out," said Felipe Cardoso, a player with the under-17 side. "Thank God I managed to run and I'm still alive."

Flamengo is one of Brazil's biggest and best-known clubs internationally. They play in the Campeonato Brasileiro Série A league where they finished in second place last season.

Club president Rodolfo Landim told reporters this was "without a doubt the worst tragedy this club has been through" in its 123-year history.

"The most important thing now is for us to try to minimise the pain and suffering of these families".

Brazil football legend Pelé described the club as "a place where young people pursue their dreams".

"It's a very sad day for Brazilian football," he tweeted.

President Jair Bolsonaro, who is receiving treatment for pneumonia, tweeted a statement from the hospital "in solidarity" with the mourning families.

He said the tragedy made victims of young people "on the journey to realising their professional dreams".

Local media have published the names of the victims, all of whom were aged between 14 and 16:

"I had the pleasure of knowing you," it reads. "God receive you with open arms".

One of the three injured, a 15-year-old boy, suffered severe burns.

Fire service Lt Col Douglas Henaut told reporters that rescuers managed to save victims outside the building, but "we only found bodies inside".

"The place was completely overtaken by fire," he said.

The area has been hit by severe storms and heavy rain in recent days and the weather may have left the facility without water or electricity when the fire struck, G1 reported.

Local media reports suggest the fire happened in an older part of the centre that was scheduled to be torn down.

UOL Sports reports that Rio de Janeiro council issued a statement saying the last licence issued for the area where the accommodation was sited was for a car park, and was valid until March 2019.

It is unknown if there were smoke alarms present.