About 150 people were forced to evacuate from a Melbourne apartment complex after a fire spread up the side of the high-rise building, which firefighters say is covered in combustible cladding. 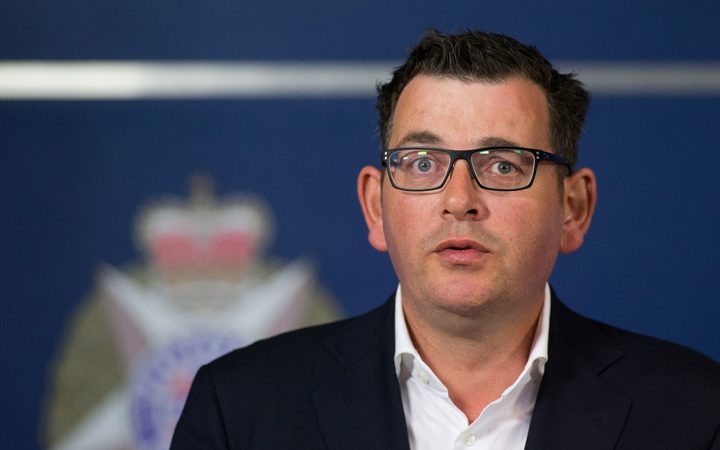 Premier Daniel Andrews said he would wait for an investigation into the fire before making comment on the role flammable cladding played in fuelling the blaze. Photo: AFP

The fire started on a 22nd-floor balcony of the 200 Spencer Street building shortly before 6:00am, and spread up the exterior of the building to the 27th floor, firefighters believe.

Fifteen fire trucks, two ladder-platform trucks and 60 firefighters were used to extinguish the fire, which was brought under control at 6:49am.

"My understanding is that the building is cladded with aluminium composite materials (ACM), so the cladding that was on the Grenfell Tower," he said.

Just by Spencer street station .. I honestly hope whoever is in there gets out okay!! #melbourne #fire — you feel so helpless looking on but the fire engines are on their way. pic.twitter.com/jYGYqSc0Wb

Mr Stephens said 150 occupants were evacuated from the building, and police and fire crews were searching every room to ensure it was clear.

He said fire investigators would determine how the blaze started and spread.

"I can't speculate at this time, what I can say is that there's evidence of external fire spread," he said.

"We do know that because the sprinklers were activated, that the fire has penetrated internally [as well]."

A man in his 20s was treated for smoke inhalation at the scene by paramedics and taken to the Royal Melbourne Hospital in a stable condition.

People evacuated from the building told the ABC they woke to a fire alarm and the smell of smoke.

"We thought that there would be a proper evacuation plan, but there was no plan, nobody was there to direct," Kimmy Sinsinwar said.

Mr Sinsinwar, who was staying at an Airbnb-rented apartment in the complex with a woman and young child, said he did not hear any specific warning besides the fire alarm.

"Being inside the building, you don't know how bad it is or what's going on so we were kind of in shock with the little one," he said.

Aaron Duncan, who lives in the complex, said the fire brigade used a loudspeaker to tell residents to evacuate about 6:00am.

"It's interesting to know the fire alarm's probably not as loud as I thought it would be," he said.

Michael Williams said he only heard the fire alarm after most residents had left the building.

"We didn't hear the alarm until about 15 minutes ago. We thought it was a few blocks down," Mr Williams said.

" then came out and had a look down and saw all the fire trucks and thought, shit, we'd better get out.

"It was pretty scary.

"It was smoky through the stairwell and then when we heard it was on the floor that we were supposed to be on we thought, someone's looking after us."

A forensic building inspector said images of the tower's exterior suggested there was a line of flammable cladding in panels where the fire broke out.

"This building is extremely safe, it's around 90 per cent made out of concrete panel construction, there's only about a 10 per cent mix of ACM panels," Sahil Bhasin told ABC Radio Melbourne.

"They are sadly exactly where this fire broke out."

The MFB warns residents in high-rise buildings to exercise extreme caution on balconies due to the risk of fires spreading vertically through flammable cladding.

Mr Bhasin, who is the general manager of Roscon, said it appeared the building's fire plan had worked "perfectly".

"The fire occurred, the sprinklers came on and, assisted with the MFB, the fire was doused."

Rectification works on those buildings were likely to begin in the next 18 months, Mr Bhasin said.

Even removing cladding from every second storey of those buildings could reduce risk by creating "firebreaks", he said.

The Neo200 apartment complex was found to be "fully compliant" with cladding standards in 2017, according to a tweet from the developer.

"While most of the building is not clad at all, where any cladding is used it is compliant with VBA [Victorian Building Authority] standards," Neo200 tweeted in June 2017.

The Neo200 website describes the apartments as "the very best in contemporary, inner-city living in a truly dynamic location" on the western end of the CBD.

Premier Daniel Andrews said he would wait for an investigation into the fire before making comment on the role flammable cladding played in fuelling the blaze.

"On the issue of Spencer Street, let's get the facts," he told ABC Radio Melbourne.

"We might be able to talk more fully then."

Mr Andrews said his Government understood there was "more to do" following the audit of cladding in Victoria.

"That includes both the fire response, inspections, the building code framework for the future so we don't see any more buildings built either with the wrong cladding or misusing cladding that is in fact ok in its nature," he said.