The gates of Townsville's dam have opened to their full setting, with the city council warning several suburbs should prepare for imminent flooding from a rapidly rising Ross River. 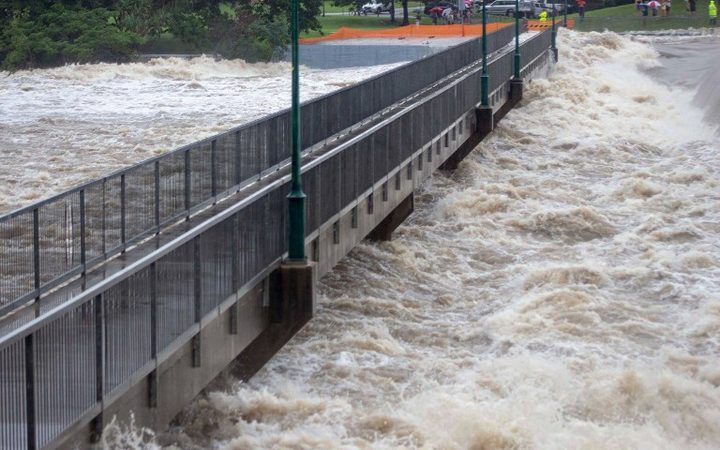 The Ross River Dam has been releasing approximately 2000 cubic metres of water per second, but was still at 247 percent capacity at midnight.

Australia's Bureau of Meteorology increased its overnight rainfall prediction to 450mm over the dam catchment by the end of Monday.

The council said dangerous and high-velocity flows would occur and residents in many nearby areas should prepare for imminent flooding.

The council said an evacuation centre at Ignatius Park College at Cranbrook had reached at capacity. Other centres were still operating at Burdell, Heatley, Alligator Creek and Bluewater.

Bureau of Meteorology hydrologist Andrew Preece said with the dam gates fully open, the threat to Townsville homes was unprecedented.

"What that means is we'll see dangerous and high-velocity flows in Ross River, resulting in risk to life and property," he said.

"We'll see unprecedented areas of flooding in Townsville, a number of access routes cut, over the next 24 hours or so."

"Sadly, we received a huge burst of rain at about 1.30 this afternoon for about three hours, that just tipped us over," she said.

"We thought we'd been able to manage it, but the rainfall we had, there was nothing we could do."

Police said they had received a number of calls from people asking to be evacuated in Idalia and neighbouring Oonoonba.

Premier Annastacia Palaszczuk toured the area on Sunday, saying it was "just torrential rain up here".

"There has never been rain like this and the dam is going to get all the catchments of further water coming in, so we need everyone to take care," she said.

"But the concern tonight of course is when those gates open - those low-lying areas - so please everybody listen to the alerts.

"This is going to be a tough night - torrential conditions, the rain is coming down, the wind is gusty, it's not a night to be out on the road at all, but we need people to be safe." 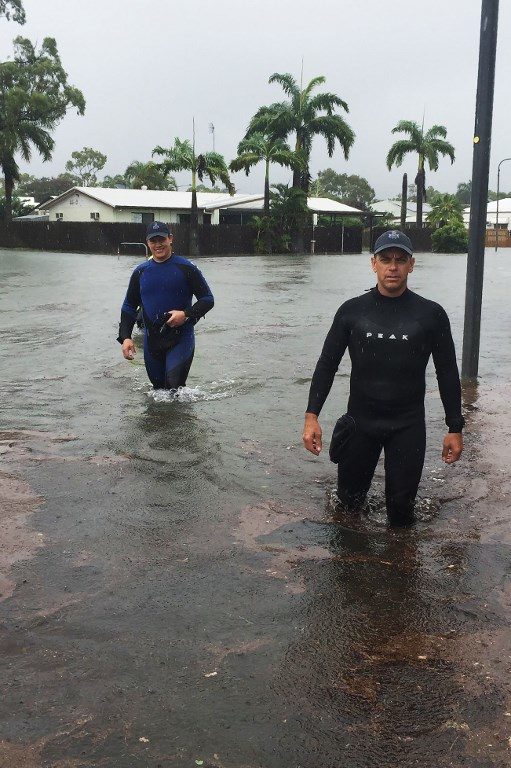 "We have pre-positioned resources all around the city so that we can still respond - fire and rescue, swift-water and rural fire - all over Townsville, so it doesn't matter where you are, we can still offer a response."

The Townsville Airport has been shut for safety reasons as the city experiences the unprecedented flood disaster.

All flights in and out of the north Queensland city have been cancelled, with diversions for any flights due to land.

The Bureau of Meteorology (BOM) issued a severe weather warning at 7.37pm on Sunday predicting heavy rainfall, destructive winds and significant flash flooding between Ingham and Bowen, potentially extending as far south as Mackay from Monday.

It said the monsoon trough was expected to shift slowly south over the next day or two to extend from Bowen, west to Hughenden and into the Gulf Country.

Further heavy rainfall has been predicted for already saturated catchments in the area for the week ahead.

BOM forecaster Dean Narramore said at 11.30am Sunday, there had been some extraordinary rainfall numbers coming in for the Townsville area, with a number of locations receiving over a metre of rain over in the last seven days.

"Particularly a number of locations to the west of Townsville where we've seen 1.4 to 1.6 metres of rain - for some locations this is approaching their yearly average in just a week," Mr Narramore said.

Mr Gunn also said six-hour rain totals of 150-200 millimetres were predicted along the coast from Ingham to Bowen during Sunday, accompanied by strong wind gusts.

Townsville disaster coordinator Assistant Chief Superintendent Steve Munro said there were 82,000 houses in Townsville and flood modelling predicted up to a quarter would be affected by flooding in the worst-case scenario.

Queensland Education Minister Grace Grace has confirmed all state schools in Townsville and surrounding areas will remain closed on Monday.

Ms Grace said the decision to close all state schools in the flood zone had been made in the interests of the safety and welfare of staff, students and school communities.

"QFES has assisted in 220 relocations of people from their residences," he said.

"The SES has received about 570 requests for assistance and that's just over the last 24 hours and working with the Defence Force too, the SES [distributing] 20,000 sandbags in the Townsville area."

Meanwhile, trucks are backed up for kilometres at Cardwell in far north Queensland waiting for the Bruce Highway to reopen.

The Bruce Highway is closed at Arnot Creek, about 125 kilometres north of Townsville, and at several spots near Ingham.

Authorities are stopping drivers who are trying to head south at Cardwell, with an increasing number of travellers and tourists stuck in the small coastal town.

Some truck drivers like Andrew Kmet are not only concerned for their deliveries but also for their families.

"We live at Bushland Beach in Townsville and my wife Tamara is with my four children aged between three and six years old," he said.

"I just want to get home, sandbag it, and make sure everything is alright.

"I did deliveries in Cairns and here last night and they closed it shortly after.

"My main problem is being stopped where I know the water isn't even coming up to my diffs and I can get through, but they won't let me."

The highway has been closed at Arnot Creek since about 11.30pm on Saturday, and with more rain forecast to hit the region on Sunday and Monday, it remains uncertain when it will reopen.

Police remain on the other side of the road closures to deter anyone who might take the risk.

There have also been more falls in western Queensland.

Julius Dam near Mount Isa in the state's north-west received 199mm in the past 24 hours.

Mount Isa and Cloncurry have received 50mm to 80mm and further heavy falls are expected yesterday and today.