Rescue operations have resumed after fears a second dam could rupture near Brumadinho, Brazil, proved unfounded in the wake of a mudslide that killed dozens, with hundreds still missing. 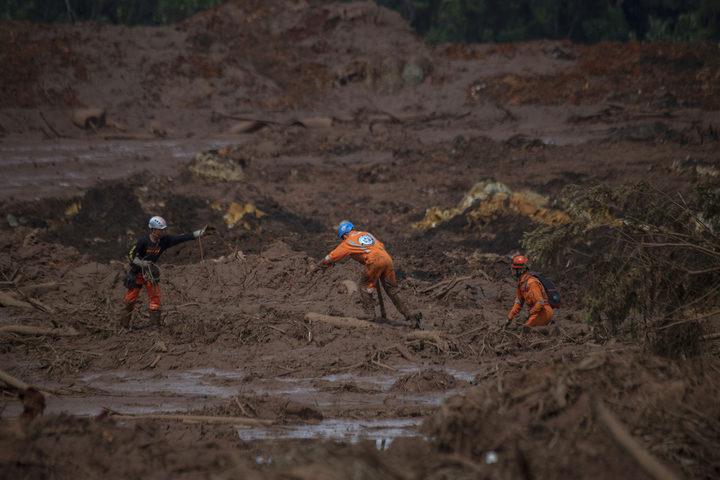 Rescuers search for vicitms in the mud two days after the collapse of a dam at an iron-ore mine belonging to Brazil's giant mining company Vale near the town of Brumadinho. Photo: AFP / Mauro Pimentel

Brazilian firefighters resumed searching on Sunday for the roughly 300 people still missing in Brumadinho, southeastern Brazil. The confirmed death toll from the collapse on Friday rose to 37 by Sunday morning, the fire department said.

They had called for people to be evacuated to higher ground as water levels at a second dam, still standing near the iron ore mine close to the town, rose to dangerous levels and triggered sirens.

The remaining dam at the mining complex in Brazil was no longer at risk of bursting, Flavio Godinho, a spokesman for the Minas Gerais civil defense agency, said. 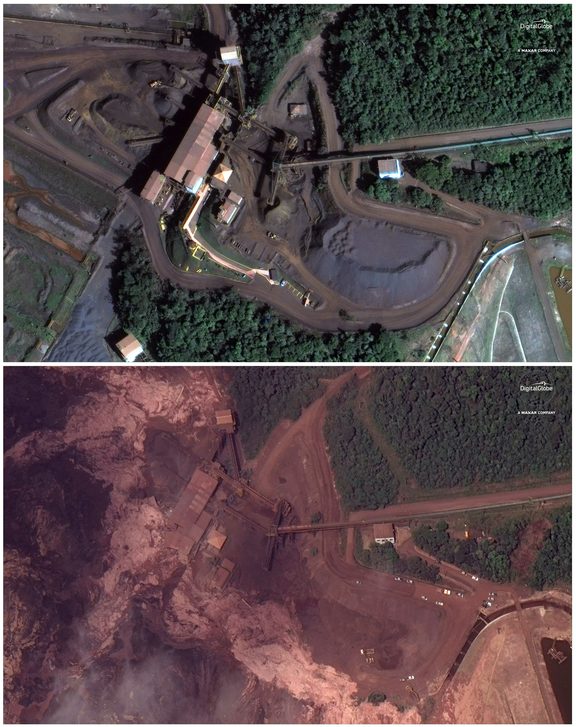 An area northeast of Brumadinho, Brazil seen on 2 June, 2018 and, below, the same area on 26 January, 2019, a day after a dam collapsed and flooded the area with mud. Photo: AP / DigitalGlobe

The evacuation had halted rescue efforts after the dam collapse at Vale's Corrego do Feijao mine on Friday, about 1pm, buried the mining facilities and nearby homes.

The official death count could rise as authorities reconcile its list of missing residents with the tally of Vale employees who are not accounted for, Mr Godinho said.

It already exceeded that of a 2015 tailings dam collapse at an iron ore mine less than 100km to the east, a Vale joint venture with BHP Group.

Fears about another dam burst in Brumadinho on Sunday triggered evacuation sirens in the town before dawn, but by afternoon officials said there was no risk and the evacuation was called off.

State fire department spokesman Pedro Aihara initially said 24,000 people would needed to be evacuated, but later revised the number down to 3,000. In total, 24,000 people are affected in some way by the disaster, he said.

The Brazilian government has ordered Vale to halt operations at the Corrego do Feijao mining complex. On Sunday, the amount of Vale assets frozen in anticipation of damages and fines was nearly doubled by the courts to 11 billion reais ($US2.9 billion).

The cause of the dam burst remained unclear. Recent inspections by a German auditor TUV SUD and Vale did not indicate any problems with the dam, the companies said. 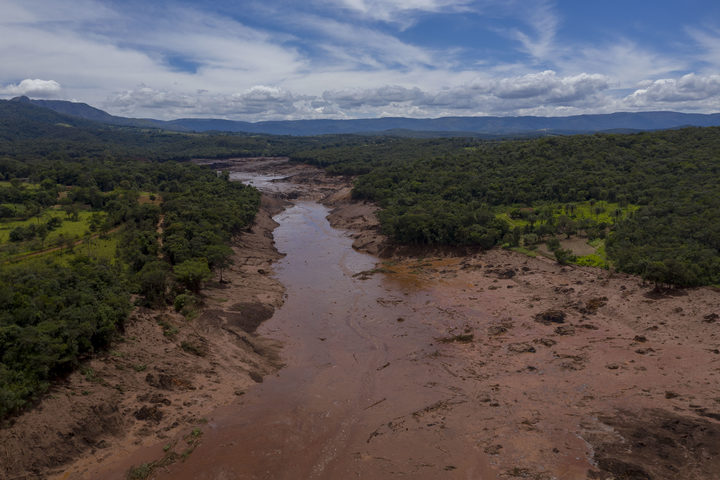 An aerial view of the area affected by a mudslide. Photo: AFP / Mauro Pimentel

Federal prosecutor Jose Adercio Sampaio said on Saturday that state and federal authorities had failed to apply more stringent regulation to the hundreds of tailings dams around the country.

Schvartsman said all of Vale's tailings dams were checked after the 2015 disaster and periodic reviews are carried out.