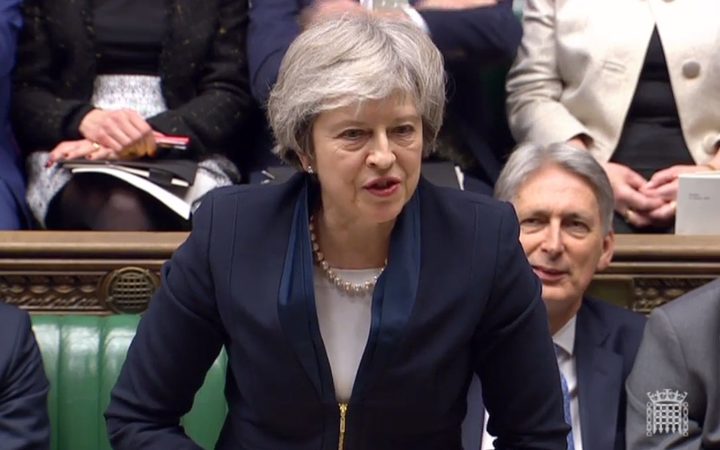 Theresa May wraps up five days of debate before a parliamentary vote on her Brexit deal. Photo: AFP / PRU

There were 202 votes for the deal but 432 against, and Labour Party leader Jeremy Corbyn has tabled a motion of no confidence in the government.

Mr Corbyn said it was a "catastrophic defeat" for the government.

The motion will be debated in Parliament tomorrow (overnight New Zealand time) with a vote likely about 8am (NZ time). It could potentially trigger a general election.

If Mrs May survives it, she said she would seek a fresh agreement with the EU and remained determined to take Britain out of the bloc on 29 March.

A spokesperson for the Democratic Unionist Party, the Northern Irish party propping up Theresa May's minority government, said it would back Mrs May in the no confidence vote.

After this morning's vote Mrs May told MPs it was her duty to deliver on Brexit.

She said she wanted to leave the bloc in an orderly way and the government would put forward realistic ideas to the European Union.

"It is clear that the house does not support this deal but tonight's vote tells us nothing about what it does support," Mrs May said.

"Nothing about how or even if it intends to honour the decision the British people took in a referendum parliament decided to hold."

. @jeremycorbyn has tabled a no confidence motion in the Government after their historic defeat on Theresa May’s deal. The Government have confirmed that this will be debated and voted upon tomorrow. pic.twitter.com/c1hdmLuKrB

European Commission president Jean-Claude Juncker said the deal's rejection increased the "risk of a disorderly withdrawal of the UK".

"While we do not want this to happen, the European Commission will continue its contingency work to help ensure the EU is fully prepared," he said.

I take note with regret of the outcome of the vote in the @HouseofCommons this evening. I urge the #UK to clarify its intentions as soon as possible. Time is almost up #Brexit https://t.co/SMmps5kexn

Donald Tusk, president of the European Council, posted his reaction on Twitter:

If a deal is impossible, and no one wants no deal, then who will finally have the courage to say what the only positive solution is?

Earlier Mrs May urged MPs to back her Brexit deal, saying it was a historic decision that the country would live with for generations.

In Mrs May's speech to mark the end of five days of debate she told MPs the vote on her controversial deal was about the country's economy, security and the future of its children.

"A vote against this deal is a vote for nothing more than uncertainty, division and the very real risk of no deal or no Brexit at all. And it doesn't have to be that way.

"Tonight we can choose certainty over uncertainty, we can choose unity over division, we can choose to deliver on our promise to the British people, not break that promise and endanger trust in politics for a generation." 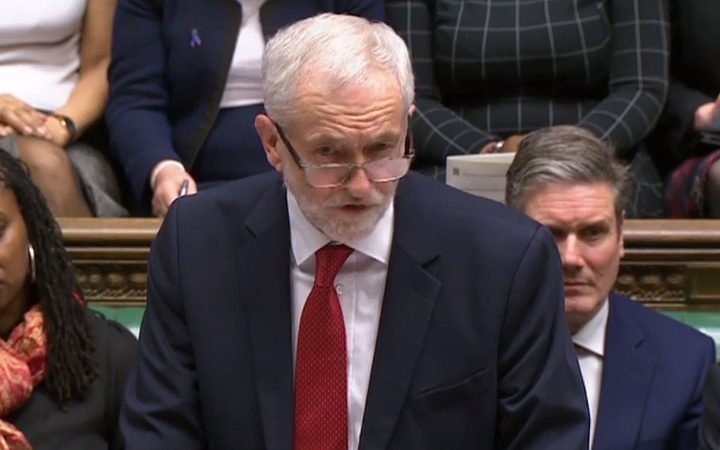 Mr Corbyn told MPs the withdrawal agreement was "a reckless leap in the dark".

He once again pushed for a general election which would give a new government a mandate to break the deadlock in the Brexit talks.

Mr Corbyn said Britain could reopen negotiations with the European Union over the terms of its departure from the bloc, as he urged MPs to reject the deal.

"I say this to our negotiating partners in the EU: If parliament votes down this deal, then re-opening negotiations should not, and can not, be ruled out," Mr Corbyn told parliament.

MPs had moved quickly to the main vote on the Brexit deal, after rejecting an amendment saying Britain should have a unilateral right to terminate the 'backstop' - the fallback plan to avoid any return to physical border checks between the country and Ireland.

A spokesman for Mrs May said the prime minister would "respond quickly to the result" of the vote. Finance minister Philip Hammond, business minister Greg Clark and Brexit minister Stephen Barclay were due to hold a conference call with business leaders at 9am (NZT) two sources told Reuters.

Outside parliament, there was something approaching a carnival atmosphere as pro- and anti-Brexit demonstrators in fancy dress, with lurid floats and colourful banners, made their voices heard ahead of the MPs' vote. 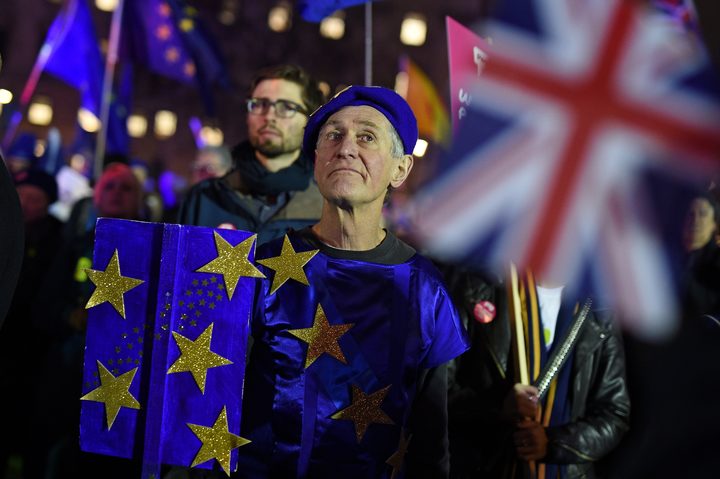 Anti-Brexit activists demonstrate with other protesters outside of the Houses of Parliament in central London. Photo: AFP