The UK Immigration minister Caroline Nokes is defending her government's handling of a surge in illegal migrants crossing the English Channel. 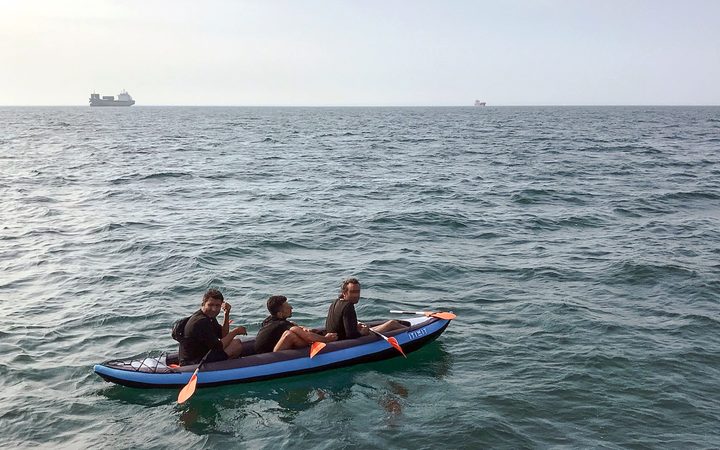 Three migrants who were attempting to cross The English Channel from France to Britain are seen as they drift in an inflatable canoe off the French coast at Calais in August. Photo: AFP

More than 220 people have attempted the crossing in small boats since November.

The Conservative MP said the Home Office was not taking the matter "seriously enough".

It comes after another 12 people were detained off the coast of Dover in the early hours of Friday morning UK time.

Only one of the Border Force's fleet of five cutters - specialist boats which the force describes as being capable of rescuing several migrant boats at the same time - is currently operational in the Dover Strait.

Ms Nokes said the number of patrol boats was being "constantly reviewed", but it was "feasible that were we to put additional craft they might act as a magnet - encouraging people to make a perilous crossing".

She said the UK was working with France to try to prevent migrants from setting out in the first place, and there was an "enormous" ongoing intelligence-led operation to deter people traffickers.

"It is really important to remember that we are dealing with people's lives, people who have taken a terrible, terrible risk, but that we are working with the French to find the most effective route for returns for those who it is appropriate for."

The National Crime Agency said that tackling the criminals behind these "extremely dangerous" attempted crossings was an "operational priority" and significant resources were devoted to them.

Chris Hogben, from the NCA, said its work with French colleagues had resulted in dozens of attempted crossings being prevented.

He said that over the last three weeks French colleagues have recovered at least 95 migrants including nine children, and arrested seven people caught attempting to facilitate these crossings.

He added that he anticipated further arrests in the coming weeks and thought more attempts to reach the UK were likely.

Mr Javid has appointed a "gold commander" to take overall charge of the situation and make strategic decisions about the response.

He was due to talk to his French counterpart about the situation over the weekend.

Mr Elphicke said "we need a clear strategy to defeat the traffickers", adding that the French authorities should step up action on their side of the Channel.

The people found off the Kent coast since November: