Officials have been reacting to the news of Japan's withdrawal from the International Whaling Commission (IWC), with the NZ Ministry of Foreign Affairs and Trade working on understanding the implications. 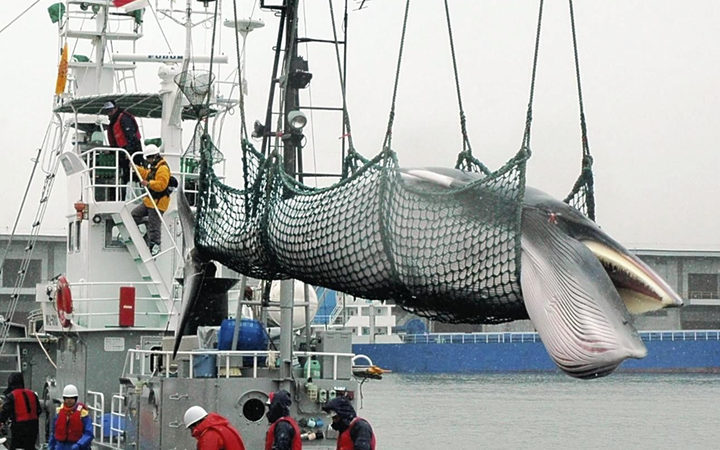 A minke whale is landed from a research whaling vessel in Kushiro, Hokkaido Prefecture, in May 2011. Photo: AFP / Yomiuri

The Japanese government has confirmed it will restart commercial whaling in July when it exits the IWC.

It will stop its so-called scientific whaling in the Antarctic Ocean, and only fish in seas near Japan and the country's exclusive economic zone.

Mr Peters said while ceasing whaling in the Southern Ocean was welcomed, it was sad to hear about the confirmation of their withdrawal.

"We are disappointed [Japan] is leaving the Commission with an intention to resume commercial whaling within Japan's own exclusive economic zone," Mr Peters said in a statement.

"Japan is a valued supporter of the international rules-based system and we had hoped Japan would choose to stay in the Commission.

"Whaling is an outdated and unnecessary practice. We continue to hope Japan eventually reconsiders its position and will cease all whaling in order to advance the protection of the ocean's ecosystems."

The Ministry of Foreign Affairs and Trade (MFAT) said it was now trying to work out the implications of the decision.

Amy Laurenson, the acting New Zealand Whaling Commissioner said under the international law of an exclusive economic zone, Japan could hunt for whales in an area that extends up to 200 nautical miles of the country.

"I think it's a big deal in terms of the intention to resume commercial whaling," she said.

But details about what that will look like is scarce and Ms Laurenson said the ministry will be waiting for more information.

Its managing director in New Zealand, Michael Lawry, said while it was concerning endangered whales would now be hunted for commercial purposes near Japan, the decision had a lot of positive outcomes.

"They've said they will no longer... kill whales in the Southern Ocean... which is fantastic news," he said.

"The next great thing about it is that if they leave the IWC, that means the Atlantic whale sanctuary will then go ahead because they've been voting against that for years."

Mr Lawry said he suspected Japan's decision was a way to "save face" and back out of whaling in the Southern Ocean.