A US court ordered Pyongyang to pay $US501 million ($NZ743m) in damages for the torture and death of US college student Otto Warmbier, who died in 2017 shortly after being released from a North Korea prison. 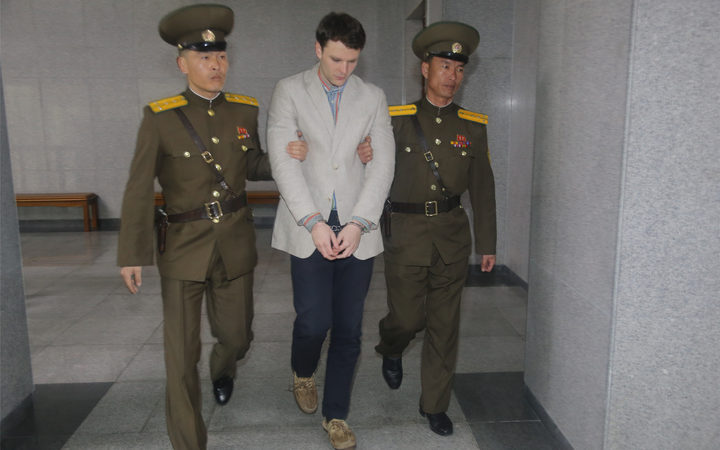 Warmbier's parents sued North Korea in April over their son's death. The 22-year-old student died days after he was returned to the United States in a coma, and an Ohio coroner said the cause of death was lack of oxygen and blood to the brain.

"North Korea is liable for the torture, hostage taking, and extrajudicial killing of Otto Warmbier, and the injuries to his mother and father, Fred and Cindy Warmbier," Judge Beryl Howell of the US District Court for the District of Columbia said in her ruling.

Pyongyang has blamed botulism and ingestion of a sleeping pill for Warmbier's death and dismissed torture claims.

Fred and Cindy Warmbier said in a statement they had promised their son justice.

"We are thankful that the United States has a fair and open judicial system so that the world can see that the Kim regime is legally and morally responsible for OttoG��s death," the Warmbiers said.

"We put ourselves and our family through the ordeal of a lawsuit and public trial because we promised Otto that we will never rest until we have justice for him," they said.

"Today's thoughtful opinion by Chief Judge Howell is a significant step on our journey."

The ruling was a default judgment, a type of decision entered against a party that does not appear in court. Default judgments against foreign defendants are often difficult to collect.

US courts can compensate default judgment holders by ordering the seizure of funds or other assets located within the country, but that is unlikely in this case because sanctions prohibit North Korea from accessing the US financial system.

The ruling comes at a sensitive time in US-North Korea diplomatic relations, as the two countries negotiate the dismantling of Pyongyang's nuclear weapons program.

President Donald Trump has said Warmbier did not die in vain and his death helped initiate a process that led to a historic meeting this year between Mr Trump and North Korean leader Kim Jong Un.

Mr Trump said in a Twitter message today: "Christmas Eve briefing with my team working on North Korea - Progress being made. Looking forward to my next summit with Chairman Kim!"

Christmas Eve briefing with my team working on North Korea – Progress being made. Looking forward to my next summit with Chairman Kim! pic.twitter.com/zPTtDbrP0o

He gave no other details. US officials have said a second meeting between Mr Trump and Mr Kim is likely in the new year.

A student at the University of Virginia, Warmbier was imprisoned in North Korea for 17 months starting in January 2016.

He had been visiting the country as a tourist. North Korea state media said he was sentenced to 15 years of hard labour for trying to steal an item bearing a propaganda slogan from his hotel.