A dopey, loveable dalmatian has miraculously appeared in the remote Australian town of Larrimah more than a week after surviving a fatal car crash and vanishing into the scorching outback. 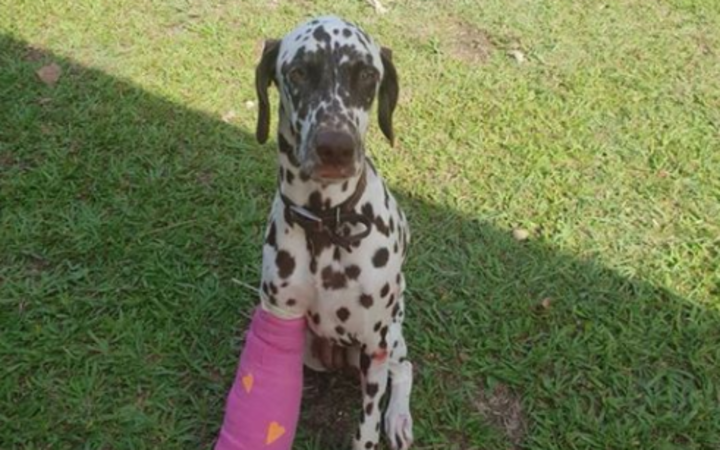 Molly was missing for more than a week in the scorching outback. Photo: Facebook / Verginia Nairn

Molly's unlikely survival is being hailed as a Christmas miracle and provides some solace for friends and family of her owner, James Fisher, who died in a single-vehicle accident south of the Stuart Highway community.

Mr Fisher was relocating to Cairns at the time of the incident last Monday, with Molly riding shotgun due to a broken leg.

But after the accident she was nowhere to be found.

"We had no sign of her for a full week," Mr Fisher's close friend Verginia Nairn said.

Ms Nairn and others took to social media, and in a series of viral posts asked people far and wide for help.

She said people scoured parts of the outback and a nearby Indigenous community got behind the cause.

But temperatures in the town of Mataranka, an hour up the highway, exceeded 40 degrees Celsius in recent days.

Molly had also been hit by a car several weeks earlier and was wearing a cast to support her leg.

"Molly is not the sharpest tool in the shed," Ms Nairn said.

"I literally thought to myself 15 minutes beforehand that it was probably time to give up."

Miraculously, Ms Nairn received a phone call on Monday morning informing her that the wayward dog was alive and well.

"Fish's partner, Lauren, rang to tell me that she'd wandered on into the mechanic's down at Larrimah with her cast an absolute mess, but alive and kicking," she said.

"I think that she must have just been out eating witchetty grubs and, I don't know, chilling in the bush and waiting for the right moment to reappear with the most drama she could possibly muster.

"It's a mystery and a miracle - a Christmas miracle."

The dalmatian will make her way to a vet in Katherine before being reunited with Mr Fisher's partner.

Ms Nairn said Mr Fisher bought the dog with his partner and it was important that his memory live on through Molly.

"It's super important for her to be able to have that closure and to have a piece of him close by, living and breathing, after such a horrible, horrible tragic accident.

"James is such a beautiful, also kind and floppy person; Molly is the perfect embodiment of that man."