Nearly 200 nations have agreed rules on implementing the 2015 Paris Agreement. 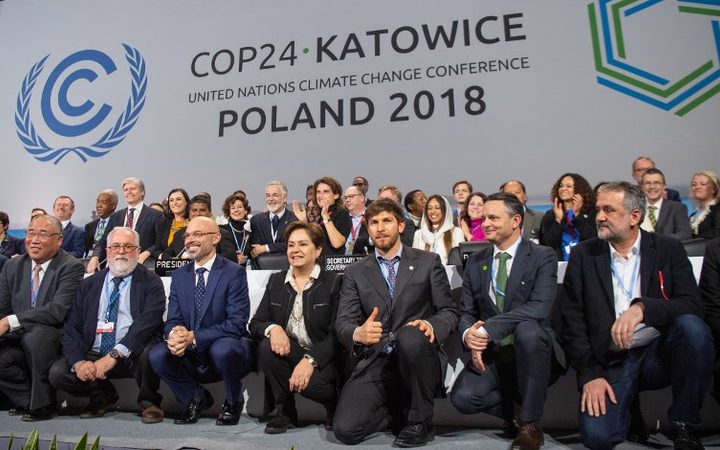 Climate Change Minister James Shaw, second right in the front row, gets together with other delegates at the end of the conference. Photo: AFP

After marathon talks in the Polish city of Katowice the rulebook was approved unanimously on Saturday evening.

The agreement aims to deliver the Paris goals of limiting global temperature rises to well below 2 degrees Celsius.

The final session was delayed by more than 30 hours amid an ongoing stand-off over carbon markets to reduce emissions. Some accused the hosts of not shepherding the agreement through.

"Putting together the Paris Agreement work programme is a big responsibility," said the chairman of the talks, known as COP24, Michal Kurtyka.

"It has been a long road. We did our best to leave no-one behind.

"This deal hangs in a fragile balance. We will all have to give in order to get. We must be courageous and take another step for the sake of humanity."

Climate Change Minister James Shaw was part of the negotiations in Poland, and said he was pleased with the outcome.

"There was progress on pretty much every front and probably the single greatest thing to come out of it was the material on transparency which applies to all countries."

Former Green Party leader Russel Norman said it was disappointing there was no increase in ambition as the Paris climate pact was secured, however, it was good that the agreement didn't fall apart.

"I mean it was great [US President] Donald Trump and co didn't manage to completely destroy the Paris Agreement so it's still there and the rulebook is being developed but if we don't actually cut our emissions it does just remain a set of rules in a book," Mr Norman said.

Rich nations often reduce emissions by paying for carbon-cutting projects in other countries. But these programmes are very difficult to police.

Fraud and double accounting have rendered many of them worthless - they are often dubbed hot air schemes.

The common rulebook envisages flexibility for poorer nations. Developing countries seek recognition and compensation for the impact of rising temperatures.

The idea of being legally liable for causing climate change has long been rejected by richer nations, who fear huge bills well into the future.

However, an eight-page decision framework text was criticised by some countries and green groups for failing to urge increased ambitions on emissions cuts sufficiently to curb rising temperatures.

"The majority of the rulebook for the Paris Agreement has been created, which is something to be thankful for," said Mohamed Adow, international climate lead at Christian Aid.

"But the fact countries had to be dragged kicking and screaming to the finish line shows that some nations have not woken up to the urgent call of the IPCC [Intergovernmental Panel on Climate Change] report," he added.

A United Nations-commissioned report by the IPCC in October warned that keeping the Earth's temperature rise to 1.5C would need "unprecedented changes" in every aspect of society.

Last week, Saudi Arabia, the United States, Russia and Kuwait refused to use the word "welcome" in association with the findings of the report.

The decision text now merely expresses gratitude for the work on the report, welcomes its timely completion and invites parties to use the information in it.

For many low-lying states and islands which are at risk from rising sea levels, this is not strong enough but had to be accepted grudgingly in exchange for other trade-offs.

"There should be a direct link between the findings of the report and the specific actions that would underpin ambition both in terms of action and finance," Simon Stiell, Grenada's environment minister, told Reuters.

"The challenges will be with some of the bigger players in terms of stepping up to their responsibilities and what is required to truly operationalise the Paris Agreement," he added.

At the eleventh hour, ministers managed to break a deadlock between Brazil and other countries over the accounting rules for the monitoring of carbon credits, deferring a bulk of that discussion to next year.