Fighting has resumed on the fringes of Yemen's port city of Hudaydah, according to residents, raising fears for a newly agreed truce. 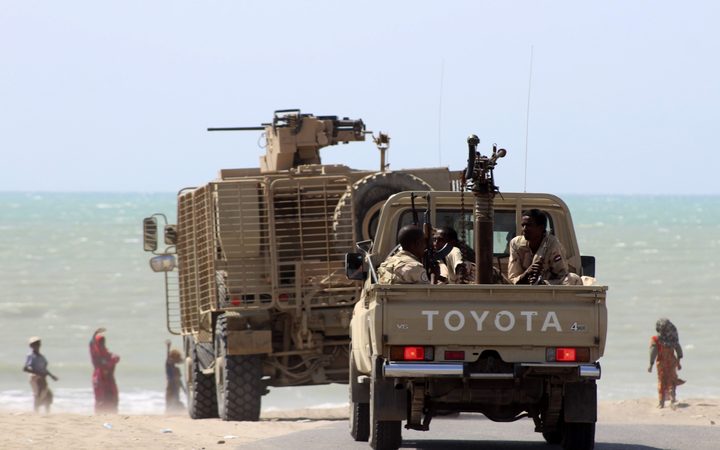 Yemeni pro-government forces are pictured on the eastern outskirts of Hudaydah. Photo: AFP

The ceasefire for the port was only agreed between the government and rebels at talks in Sweden on Thursday.

It is hoped Hudaydah, occupied by Houthi rebels, can be used to bring in supplies for starving millions.

Yemeni government forces backed by a Saudi-led coalition are ranged against Houthi rebels. Iran is accused of giving military backing to the rebels, something it denies.

Residents speaking to international news agencies said they heard shell and gunfire in an eastern district of Hudaydah.

A resident in the south of the city also reported hearing artillery fire.

A Houthi-run TV station said coalition war planes had hit Ras Isa, a port north of Hudaydah that was also part of the truce agreement.

What was agreed in Stockholm?

The truce, brokered by the United Nations, provided for the withdrawal of both warring parties from Hudaydah within days. They would be replaced by what the UN called local forces.

The deal also stipulates that international monitors should be deployed.

UN Secretary General Antonio Guterres said on Thursday that the agreement should be the trigger for ending nearly four years of civil war.

Leaders of the government and Houthi delegations shook hands in public after the truce was agreed.

The Stockholm talks were the first in two years between the Houthis and the Yemeni government.

Why is there a war in Yemen?

Yemen has been devastated by a conflict that escalated in early 2015, when the Houthis seized control of much of the west of the country and forced President Abdrabbuh Mansour Hadi to flee abroad.

At least 6660 civilians have been killed and 10,560 injured in the fighting, according to the United Nations. Thousands more civilians have died from preventable causes, including malnutrition, disease and poor health.

The World Health Organization warned in October that about 10,000 new suspected cases of cholera were now being reported every week.