The office investigating alleged Russian collusion in the 2016 US election has said it is not pursuing a jail sentence for ex-national security adviser Michael Flynn. 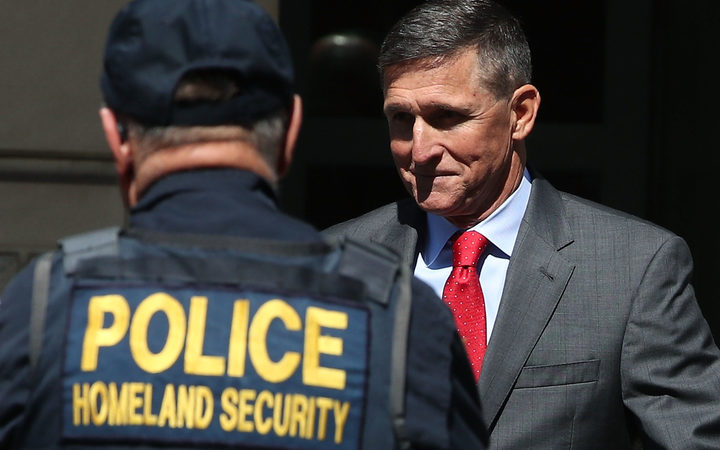 Michael Flynn is the only member of the Trump administration so far to plead guilty as a result of the investigation. Photo: AFP

Mr Flynn has admitted one count of lying to the FBI.

He is the only member of the Trump administration so far to plead guilty as a result of the investigation.

President Donald Trump has called the investigation a witch hunt and denies there was any collusion between his team and Russian officials to try to secure his election victory.

Why has the memo been released?

Mr Mueller's office released the memo as guidance to the judge who will sentence Michael Flynn.

He is due to be sentenced in the US District Court for the District of Columbia on 18 December.

Mr Flynn has pleaded guilty to one count of making materially false statements to the FBI.

He admitted that he discussed lifting US sanctions on Russia with the Russian ambassador to Washington before Mr Trump took office, and that he lied to the US vice-president about that conversation.

What is in the memo?

It says Mr Flynn has provided assistance in multiple investigations and has also given information on co-ordination between the Russian government and the Trump campaign.

Consequently, it says: "A sentence at the low end of the guideline range - including a sentence that does not impose a term of incarceration - is appropriate and warranted."

The memo points to Mr Flynn's "exemplary" military and public service and that he "deserves credit for accepting responsibility in a timely fashion and substantially assisting the government".

It had been thought details of Russian collusion might be included in the memo but the document says that, due to the "sensitive information about ongoing investigations", certain aspects have been sealed.

An addendum to the memo on Mr Flynn's assistance is heavily redacted.

This is the most intriguing element. In one section there is the simple sentence "the defendant has provided substantial assistance in a criminal investigation" but everything below it is blacked out.

Who is Michael Flynn?

He had been a fervent supporter of Mr Trump during the election campaign and was appointed Mr Trump's national security adviser even though former President Barack Obama had warned against the appointment.

It was a short tenure, ending in February 2017 after just 23 days, his departure forced by the revelation he had lied to Vice-President Mike Pence about the discussion with then-Russian ambassador Sergei Kislyak.

Further allegations then arose over a failure to disclose payments from Russian and Turkish lobbyists that he was given for speeches and consulting work.

The retired US Army three-star lieutenant-general had earlier led the Defence Intelligence Agency (DIA) but was fired, on the surface for comments about Islamist extremism, although insiders also pointed to his unpopular overhaul of the agency.