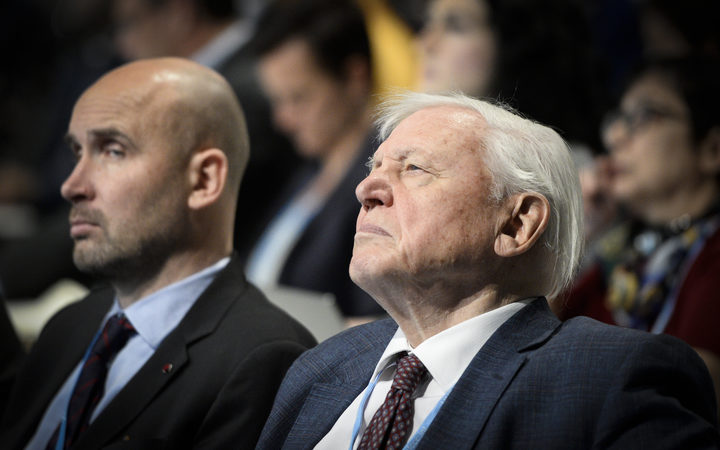 Environmental activist and TV personality David Attenborough is seen at the opening of the Climate Change Conference COP24 in Katowice, Poland. Photo: AFP

The broadcaster said it could lead to the collapse of civilisations and the extinction of "much of the natural world".

He was speaking at the opening ceremony of United Nations-sponsored climate talks in Katowice, Poland.

The meeting is the most critical on climate change since the 2015 Paris agreement.

Sir David said: "Right now, we are facing a man-made disaster of global scale. Our greatest threat in thousands of years. Climate change.

"If we don't take action, the collapse of our civilisations and the extinction of much of the natural world is on the horizon."

The naturalist is taking up the "People's Seat" at the conference, called COP24. He is supposed to act as a link between the public and policy-makers at the meeting.

"The world's people have spoken. Their message is clear. Time is running out. They want you, the decision-makers, to act now," he said.

Speaking at the opening ceremony, Antonio Guterres, UN Secretary-General, said climate change was already "a matter of life and death" for many countries.

He explained that the world is "nowhere near where it needs to be" on the transition to a low-carbon economy.

But the UN Secretary-General said the conference was an effort to "right the ship" and he would convene a climate summit next year to discuss next steps.

Meanwhile, the World Bank has announced $US200 billion ($NZ288b) in funding over five years to support countries taking action against climate change.

This Conference of the Parties (COP) is the first to be held since the landmark Intergovernmental Panel on Climate Change (IPCC) report on limiting global temperature rise to 1.5C came out in October.

The IPCC stated that to keep to the 1.5C goal, governments would have to slash emissions of greenhouse gases by 45 percent by 2030.

But a recent study showed that CO2 emissions are on the rise again after stalling for four years.

They say "decisive action in the next two years will be crucial".

Meanwhile, the gap between what countries say they are doing and what needs to be done has never been wider.

So urgent is the task that some negotiators began their meetings on Sunday, a day before the official start.

Some 29 heads of state and government are due to give statements at the opening of the meeting.

The number is way down on the stellar cast that turned up in Paris in 2015, which perhaps indicates that many are seeing this as more a technical stage on the road to tackling climate change than a big bang moment.

But for the likes of China and the EU, the meeting is critical. They will want to show that international co-operation can still work even in the age of President Trump.

Rather than spending all their time working on how to increase ambitions to cut carbon, conference delegates are likely to focus on trying to finalise the technical rules of how the Paris agreement will work.

While the agreement was ratified in record time by more than 180 countries in 2016, it doesn't become operational until 2020.

Before then, delegates must sort out common rules on measuring, reporting and verifying (checking to avoid the misreporting of) greenhouse gas emissions, and on how climate finance is going to be provided.

"The rulebook is the thing that will absorb most of the negotiators' capacity at this year's COP," said Camilla Born, from the climate change think tank, E3G.

"It's no surprise, as agreeing the Paris rules is both technically and politically a complicated task - but it is worth it!"

Under the Paris agreement, each country decides for itself the actions it will take when it comes to cutting carbon. Some observers believe that the changed mood and the urgency of the science will prompt action.

"We are hoping that at COP24, countries will make declarations of how they will raise their ambitions by 2020. This is a very important moment," said Fernanda Carvalho with campaign group WWF.

"Two years is a short time span for that to happen. Countries need to act fast."

The fact that the conference is taking place in a strong coal region, in a city that is home to the biggest coal company in the EU, is troubling to many.

The Polish government says that it is sticking with the fuel, and has announced that it is planning to invest next year in the construction of a new coal mine in Silesia.

This bullish approach has drawn condemnation from some.

"Unfortunately, this week's announcement by the [meeting's] Polish presidency that it will include coal companies as sponsors of the COP sends a very worrisome signal before the conference even begins," said Sébastien Duyck, a senior attorney at the Centre for International Environmental Law.