CNN has filed a lawsuit against the Trump administration after the White House suspended the credentials of one of its senior journalists. 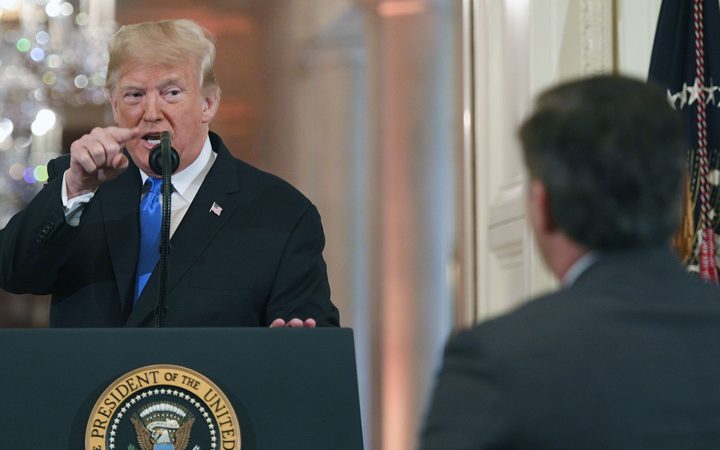 Its chief White House correspondent, Jim Acosta, had his press "hard pass" revoked last week hours after he got into a testy exchange with Mr Trump.

The network alleges this violates its and Acosta's constitutional rights.

The lawsuit, filed in Washington DC on Tuesday (Wednesday NZT), names the president and other senior aides as defendants.

I’ve just been denied entrance to the WH. Secret Service just informed me I cannot enter the WH grounds for my 8pm hit

Among those named are Chief of Staff John Kelly and White House Press Secretary Sarah Sanders, who cited unacceptable conduct as grounds for the revocation of Acosta's pass.

On Tuesday Ms Sanders said in a statement that Acosta is one of nearly 50 hard pass holders at the CNN network, adding that it was "not the first time this reporter has inappropriately refused to yield to other reporters".

"The White House cannot run an orderly and fair press conference when a reporter acts this way, which is neither appropriate nor professional," the statement read.

"The First Amendment is not served when a single reporter, of more than 150 present, attempts to monopolize the floor. If there is no check on this type of behaviour it impedes the ability of the President, the White House staff, and members of the media to conduct business."

In a Twitter thread after the incident, Ms Sanders accused Acosta of "placing his hands on a young woman just trying to do her job" - referring to a White House intern who had tried to get the microphone away from him during a news conference.

The press secretary later shared a zoomed-in clip of the incident, which experts have suggested was doctored to alter its speed.

As a result of today’s incident, the White House is suspending the hard pass of the reporter involved until further notice.

In the aftermath, the White House Correspondents' Association, which represents the press corps at the presidential residence, urged the administration to reverse the decision.

"We have asked this court for an immediate restraining order requiring the pass be returned to Jim, and will seek permanent relief as part of this process," CNN said in a statement.

"While the suit is specific to CNN and Acosta, this could have happened to anyone. If left unchallenged, the actions of the White House would create a dangerous chilling effect for any journalist who covers our elected officials."